My Part in Lesbian and Gay History Month. 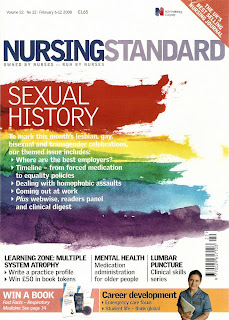 My article was a look at homophobic violence and what nurses can do for people who’ve been victims of it (I don’t use the word victim lightly). We have seen a rise of homophobic attacks, which frighteningly seems to have increased with all the new rights we’ve won. Nurses can often be the first healthcare professionals who come into contact victims of it yet its a subject that is rarely talked about. My article was a simple guide for nurses faced with a victim, I didn’t go into any details of what causes it or how to psychologically treat the effects of it, it was just a simple guide for what to do if a nurse is faced with someone who’s been homophobically attacked. It did give me my first double page feature in Nursing Standard.

The Nursing Standard LGBT History Month special is something I believe strongly in. Nursing is seen as a “caring” profession yet there is so much ignorance about LGBT issues in it. When I was a student nurse (all those years ago) I was faced with a wall of homophobia from my follow student nurses, it was a shock at the time. During my nursing career I’ve seen so much ignorance, often not willful homophobia but ignorance driving homophobia, and yet Lesbians and Gay Men are still many nurses’ patients – even if the nurses don’t realize it. The only way to open peoples’ eyes is information, is writing about the issues in the nursing press (who still carry a lot of influence).

I started writing for the Nursing Standard with their first LGBT History Month special, now I regularly write for them as a freelancer and I’m not going to stop any time soon; but the LGBT History Month special is still so important to me. As a student nurse I could never have imaged any nursing publication having a Lesbian and Gay special, they rarely carried any articles about any LGBT issues: I don’t want to go back to that time.