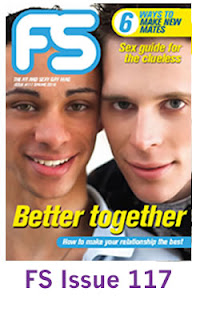 Some things are worth writing about and some writing can actually make a difference. I’m very proud to say that I regularly write for a publication that does just that. FS Magazine is published by GMFA and is a gay men’s health magazine. It aims to be informative about gay men’s health needs, but not patronizing or talking down.
I’ve been writing articles for FS now for over four years and have loved every moment of it. It has helped my tone my style, I want my writing to be informative but never preachy, and I’ve been able to use a lot of the skills and knowledge I’ve acquired as a nurse. Gay men’s health isn’t just about HIV and AIDS, though that is an important part of it, but covers a wide range of issues, including access to health services and all the other issues that affect the health of men in general – but are rarely targeted at gay men.
Sexual health is a very important issue, from STIs, through gay relationships and sexual activity. So often, these issues are never discussed. Once we’ve come out as gay it seems we have to learn this almost by absorbing it from those around us, or else we didn’t learn them at all. The current gay press doesn’t seem interested in health matters, beyond how to get a six-pack and look like all the other muscle boys. FS is the only publication offering any form of good and reliable health advice. 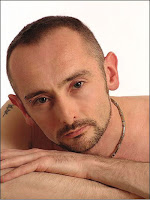 The best thing is that FS is available free. It’s distributed to gay venues, bars and clubs, gay centres and Sexual Health Clinics around the country, not just in London. You can also download it from: http://www.gmfa.org.uk/national/fs-magazine/index
There’s also a Facebook page for FS, at: http://www.facebook.com/pages/FS-magazine/36574833972?v=wall
Please follow FS, it’s a wonderful publication that really does deserve our support. Also, if you’re so inclined, FS is always looking for models, details in the magazine itself.
Drew.
Posted by Drew Payne at 21:13 No comments:

I Am Not Alone

Two weeks ago I blogged about my feelings about the proposed visit to England by the Pope – “I Don’t Want the Pope” (http://drewpayne.blogspot.com/2010/04/i-dont-want-pope.html ). Well, it seems I’m not alone.
A memo from the Foreign Office has surface with some very imaginative ideas for the Pope’s visit (http://news.bbc.co.uk/1/hi/uk/8642404.stm). The document (unfortunately not a policy statement) suggested different themes for the Pope’s visit. These included: the launch of "Benedict" condoms, the Pope could be invited to open an abortion clinic, bless a gay marriage, he could sack “dodgy bishops" (Ones that covered up the abuse by pedophile priests), launch a helpline for abused children and record a charity song with the Queen (the last idea is frightening, can either of them sing?). 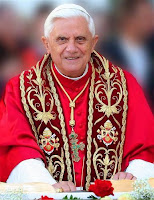 Now the document wasn’t serious, just the result of a brainstorming exercise, but what if its suggestions were actual requirements of the Pope visiting this country. They would go a long way towards the Pope showing a penance for the sins of his church. But I’m not holding my breath. The Pope hasn’t even expressed any regret for the decades of covering up of the abuse of child by priests.
Drew.
Posted by Drew Payne at 19:43 No comments:

I’ve blogged before about the upcoming book Nurses on the Run, which includes one of my essays, ( http://drewpayne.blogspot.com/2010/03/something-to-add-to-your-shopping.html ), there is now a Facebook page dedicated to it.

There you can find out more details of the book and were you can buy it. There’s also regular posts about the book and events related to it.
Facebook pages have become a good way to promote a book and share information about a it, this one does that too.
The page can be found at: http://www.facebook.com/nursesontherun
If you’re a Facebook member you can follow the page via Facebook, if not why not join because it’s a good way to keep in touch with people and a fun way to waste time.
Drew.
Posted by Drew Payne at 13:57 No comments:

I Don’t Want the Pope

In September this year Pope Benedict XVI plans to visit England and we, the British public, have to pay for it. We have to pay the costs of the Pope’s visit, including all the high security costs, yet the Pope heads up one of the richest institutions in the world.
I certainly won’t be going to see the Pope when he is here. More and more I find myself repulsed by the Catholic Church, by its treatment of women and their rights, their ignorant and intransient opposition to contraception and the use of condoms to prevent HIV, their vitriolic homophobia and the decades of covering up the sexual abuse by their priests. The Pope has proved as vocal in his reactionary views as the church he heads up. According to him, I, as a gay man, am far more of a risk to the world then global warning (!!). Before he became Pope Benedict XVI he was head of Prefect of the Congregation for the Doctrine of the Faith, the Canon Court of the Catholic Church, and now more and more dirt from the sexual abuse cover-up is sticking to him.
What does anger me is that my taxes still have to pay for this man to come to my country and patronise and insult me from my own land. Why can’t Catholics and the Catholic Church pay for this visit, why do we as taxes payers have to foot the bill, especially when the huge majority of us are not practising Catholics.

There’s now a way to protest. There is a petition, on the 10 Downing Street website, to sign that calls for the government to distance themselves from the Pope’s repressive views and assures us that British tax payers will not be footing the bill for the Pope’s visit. Here’s the link:
http://petitions.number10.gov.uk/ProtestthePope/
Drew.
P.S. I have Paul Burston’s blog to thank for the link to this petition.
Posted by Drew Payne at 13:17 2 comments:

The Doctor is Back 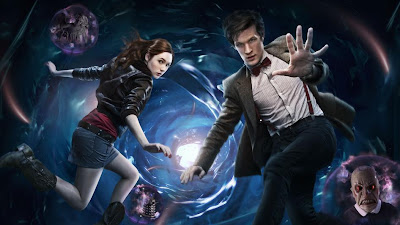 Doctor Who is back on our screens, and this time it’s for a full series. We have a new Doctor, a new companion and a new Head Writer. Last week saw the introduction of the new companion, Amy Pond.
Previously, The Doctor had dropped into the new companion’s life and rushed them off their feet in a whirlwind adventure. Last week’s opening episode saw The Doctor land in Amy’s life when she was seven, he only stayed for short period but at the end of it promised to come back for her; but he never did that night, not until twelve years later. In the meantime Amy became fixated on The Doctor, “The Raggedy Doctor” as she called him.
This storyline struck a chord with me. As a child I was a dedicated fan of Doctor Who, it was a terrible day if I missed an episode, though my parents didn’t share my belief. I loved the adventure and other-worldliness of the stories, but most of all I loved the idea of The Doctor’s Tardis – the vessel he travelled time and space in.
As a child, I imaged the Tardis landing in my own back garden, me stepping inside and then taken away for a world of adventure. In a magical blue box being able to escape both my life and the place I lived, I hated them both. It was a cliché but I was a very unhappy child, I had few friends and hated the place I lived in, suburban Liverpool wasn’t kind on those it saw as “different”.
Watching Doctor Who certainly filled my childhood need for escape, but it was more than that. It was the quality of the stories that kept me watching, and keeps me enjoying it now with the new series. Then I watched the first episode of this series, The Eleventh Hour, and that childhood longing came back to me. In seven year old Amy’s desperation for escape and the sadness of when The Doctor never returned for her, for a moment, I remembered that feeling of longing for escape when I was a child.
But isn’t that what good drama does, allows us to see ourselves in the lives of its characters.
Drew.
Posted by Drew Payne at 23:23 No comments: