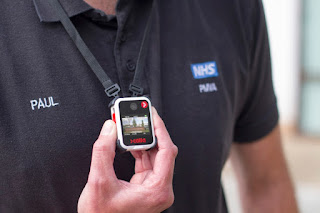 The Met Police have rolled out the use of Body Worn Cameras (1) across 30 of the 32 London boroughs, and they have had a great deal of success with them. They have said that the cameras have helped with the Met Police’s transparency (2). There are now plans for armed police officers to use them (2).

On the back of this success Guy’s and Thomas’ NHS Trust has started to use them with their security guards (3). This is in response to a 27% increase in reported “incidents” (3).

Body Worn Cameras have showed that they are useful with the police and proving useful for security staff but Northamptonshire Healthcare NHS Foundation Trust has rolled them out for nurses to use in Berrywood Hospital, a psychiatric unit (4). This is certainly going one step further.

The report of the pilot study, of the cameras usage, makes interesting reading, but has to be carefully read (5). The report is written in very positive terms, a casual read would easily give the impression that these cameras were perfect and solved all the unit’s “incidents”. But a closer read showed that these cameras are not the “perfect solution”, there were many problems with them, such as:

They don’t seem the perfect solution to violence against staff that they are being painted as. I work as a Community Nurse (Delivering nursing care in people’s own homes) and if my Trust introduced body worn cameras I would refuse to wear them, and my reasons why are very plain.


I am not naïve, I know violence against NHS staff is a raising, there are almost 200 assaults on NHS staff a day (7), and that I am particularly venerable working as a Community Nurse, half of Community Nurses (who took part in an RCN survey) said they’d been assaulted at work (8), but I don’t see body worn cameras as the solution. I can see why they are appearing popular to senior management, they are a quick and easy fix, a “simple” IT answer. But a closer examination shows that they do not provide that solution.

Where is the political will, in the NHS or parliament, to tackle violence against NHS staff? Is it too busy looking at shiny, new body worn cameras?

Drew Payne
Posted by Drew Payne at 19:53 No comments:

Money For Nothing and Your Chips for Free 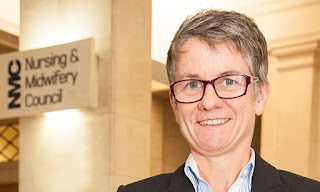 That £35,743 rise is equivalent to the yearly salary for a Band 6 Nurse (1), someone working as a Junior Ward Manager or Deputy Team Leader. In one year she has received a percentage increase in her salary greater than the combined pay rises NHS nurses have received since 2010. Since 2010 NHS nurses’ pay has risen by only 6% (2).

Is she worth this pay rise?

The NMC seems to think so. In their annual report they said, “Executive salaries in the NMC were generally out of alignment with median pay for comparable roles in the wider market, in some cases considerably so.” (1) It may sound familiar because it’s the same argument that was used in 2015 when MPs received an inflation busting 10% pay rise (3). That wasn’t a popular move.

The NMC’s own Annual Report and Accounts 2015–2016 (4) details many of the NMC’s current failings. From it I learnt of the following failings:
This are just the failings that the NMC themselves identified, even though their annual report tried to wrap them up in positive sounding management speak.

The Professional Standards Authority (PSA) is an independent body, accountable to Parliament, which has a duty to oversee the work of the nine statutory bodies that regulate health and care professionals in the UK, including the NMC (6). For the last two years they have produced an annual report comparing all the organisations they regulate and how well each organisation is operating. Their recent report did not paint the NMC in any type of glowing light (7). They found the NMC failing in the following ways:
These are incredibly serious failing and all of them revolved around Fitness to Practice hearings, something that the NMC has repeatedly failed at. The previous year the NMC failed to meet five of the PSA’s standards (9). They have improved but it is disgusting that they first got into this position and that it took a PSA’s report to force them to improve. Would they have improved without this public naming and shaming by their own regulator?

What is most shocking, though, is that the NMC is being stripped of its supervision of midwives (10). They will continue to regulate midwives, but they will be stripped of their statutory responsibility to also supervise midwives. This is a huge change to the NMC, they are being stripped of one of their statutory responsibilities. The NMC are trying to spin this as a positive change (11), but this is a result of NMC failings. A damning Kings Fund report (12), commissioned by Parliamentary and Health Service Ombudsman following the failing in maternity care at Morecambe Bay NHS Foundation Trust, found that the NMC was not suitable to carry on supervising midwives. This is all in the light of this week’s news that maternity units in England were forced to close 382 times last year because of shortages of midwives (13).

These are not the only issues the NMC has in its role as regulator, it is failing nurses in so many different way.

It can take the NMC two to three months to be process a newly qualified nurse onto the nursing register and get them their PIN number (14), without which they cannot work as a registered nurse. This makes starting their first job challenging at best.

Disproportionate amounts of BME, male and older nurses are referred to Fitness to Practice hearings. 16% of new complaints to the NMC are about BME nurses, but only 7% of registered nurses are BME (15). 25% of new complaints were against male nurses and men make up only 11% of registered nurses (15). Nurses over 40 make up 76% of new complaints, and yet only 69% of registered nurses are over 40, and four out five nurses struck off by the NMC are over forty (16). The NMC has a legal responsibility to reduce discrimination, yet all they seem to have done is commission research that told them a disproportionately high number of BME nurses receive complaints against them (8), nothing more than that. So far they have announced no plans to tackle this obvious discrimination, nor do they seem very interest in it.

Recent NMC Fitness to Practice Hearings have produced some very questionable findings. Jane Kendall, the nurse who was convicted of harming a patient because she didn’t perform CPR on that patient after they had died over an hour before. Donna Wood was convinced of falsely recording a temperature when there was no physical evidence that she did. They even tried to prosecute Pauline Cafferkey for contracting Ebola, they failed and were publicly roasted in the media for doing so. Their response to this was to no longer publish the names and allegations of nurses and midwives under investigation (20), removing another level of transparency.

The NMC proposes to split the role of mentor into practice supervisors and practice assessors (20a), were the supervisor would train the student and the assessor would only assess them. It is hard enough to find enough nurses to act as mentors, under this scheme we would have to double the numbers, even before we come to all the problems inherent with splitting the role. Again they showed they do not know what is involved in the role of a Registered Nurse, and they regulate the role.

Nursing is in crisis now and the NMC has provided no leadership on any of the problems facing us. They have been overly silent on the following issues:
Yet the NMC has remained silent over all this, no advice, no guidance, no leadership. It is as if the NMC is not bothered by any of this. If nurses are under increasing stress and workloads, with falling numbers of actual nurses, this is the perfect situation for mistakes and errors to be made. Surely, as the nursing regulator the NMC would want to cut down on any mistakes? Or are they only interested in running Fitness to Practice hearings?

The NMC’s predecessor, the UKCC held regular elections to its governing council (29). All Registered Nurses were able to vote for who would be members of it. We cannot do this with the NMC because their governing council are appointed, after a selection process, by the Privy Council (4). As nurses, we have no say in the running of our regulator, the NMC, and no way to change their failings.

In 2015, Professor Ian Peate, professor of nursing at the school of health studies in Gibraltar and editor-in-chief of the British Journal of Nursing, wrote a scathing editorial criticising the NMC’s performance (30). He basically called them unfit for purpose, I cannot see how NMC has improved since then. His assessment of them still stands.

I cannot see how. Researching this blog left me feeling sick and demoralised reading all the failings of the NMC, and by how little the NMC seems to be doing to correct them. Jackie Smith is at the helm of this organisation and seems unable or unwilling to solve these failings. How can the NMC turn themselves around with Jackie Smith still in charge? The organisation needs a new chief executive, a new leader to solve their problems. But after bestowing an obscenely large pay increase on Jackie Smith, there seems no desire to do this by the NMC’s council.

As for me, there is nothing I can do about this, I have no voice in the NMC, but I still have to pay them my annual fee otherwise I cannot work as a nurse. I have no say in this at all.