For several years I had my own website and then I lost it, because the company I paid to host it went bust but they didn’t tell me. I found out almost by accident, suddenly it was gone. There was nothing I could but start again.
Now, I have a new one, a slightly different domain name, but I have it back online. It can be found at: www.drew-payne.co.uk
My website was and still is a showcase of my writing. There can be found copies of my short stories, but there are also copies of my non-fiction writing (reviews, articles and memoir). I’ve also posted links there to a lot of my writing that has appeared on other websites.
As it says on the front page, why don’t you come and visit my website and waste sometime, life’s too short to rush by...
Drew
Posted by Drew Payne at 20:45 No comments:

It’s All Just a Simple Choice... 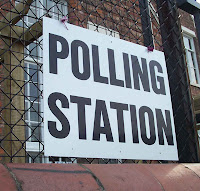 In 1981 Norman Tebbit (The former Conservative MP and then Employment Secretary) said that unemployed people should get on their bikes and go and find work. At the time my parents agreed with him, but my family hadn’t experienced unemployment. My brother and sister both had jobs and I was still at school. When I did leave school, three years later, unemployment was even worse and I had no chance of finding a job. I had no experience and only a handful of qualifications, employers weren’t interested in me and the tiny amount of benefit money I got meant I couldn’t travel to look for work.
Seeing, first hand, my experience of unemployment changed my parents’ attitudes – there was no more talk of “getting on your bike”. It especially opened my mother’s eye.
My own political views have always been shaped by my experiences, as a nurse, as a gay man, as a lapsed Christian, my childhood, the places I’ve lived in and the people I know and have known. I have a deep desire for social justice – I’ve always been a dreamer.
Then they called a general election. I’d lost interest in it even before all the campaigning had started. There was only one choice, did you want Gordon brown or David Cameron as Prime Minister, because their policies are almost identical and neither of them is a great leader (and I had such high hopes for Gordon Brown, well I was wrong there). Then we had the first election debate, on television. At the time I dismissed it as another example of British politics turning into the American version, I didn’t watch it. The day after it everything changed. Nick Clegg had shined in the debate and suddenly it was a three horse race, and my interest jumped up.
We may be looking at a hung Parliament, and the Labour/Conservative politicians and the Tory press are screaming blue murder about this (listening to them you’d think it would be the end of our country), and I think that would be a good idea. With a hung Parliament, whoever forms the government will have to discuss and make deals with the other parties, they wouldn’t be able just push through their policies by the force of their majority, we may finally get back to political debate in Parliament.
Tomorrow should be very interesting...
Drew.
Posted by Drew Payne at 07:26 No comments:

Step Back and See the Full Picture 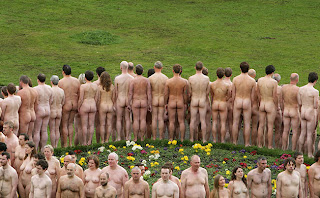 This weekend saw Spencer Tunick, the New York-based photographer known for taking pictures of hundreds of nude people in different locations, at work in Manchester and Salford. He photographed of a thousand nude volunteers in six different locations to reflect the work of artist LS Lowry, for an exhibition at The Lowry gallery (http://news.bbc.co.uk/1/hi/england/manchester/8655680.stm). 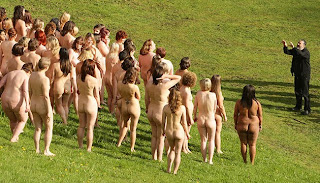 This might not sound too unusual, now, because Spencer Tunick is known for this type of photograph; but it should be remembered that all those naked volunteers were British people, not porn star or models but ordinary members of the British public. We British have a reputation for being reserved, “No sex please, we’re British” and “We don’t do that, we’re British”; but this photo-shoot certainly disproves that. Anyone who’s been in British city centre on a Friday or Saturday night will testify to that.
Yet too quickly we fall back into those racial and cultural stereotypes, the reserved Englishman, the loud and brash American, the sex mad French woman, the humourless and ordered German, etc...
As a writer, I’m very aware of the danger of falling into the trap of these stereotypes, they can be lazy and patronising to readers. But, like everyone else, I have my own personal prejudices and so easily they can come out in my writing. I’m always trying to keep an eye open for them. One very relevant trap for me is the nasty Christian character. I can often be tempted to pour all the failings and prejudices of the Christian Church into one character, I have to very careful.
This short story of mine, Praying in the Stock Cupboard, I hope doesn’t fall into that trap. The Christian character might not be the most lovable, she’s really quite a pathetic creature, but not the all consuming monster either. The story can be found at: http://www.gayflashfiction.com/Story_Archive/Praying.html
Happy reading.
Drew.
Posted by Drew Payne at 15:05 No comments: