Something to Add to Your Shopping Basket 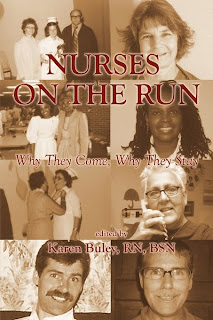 Life can inspire so much literature, and in my case so much of what I write comes directly from life; but it can also be an expression of frustration.
Back in 2007 I was taking a teaching session and in the front row was a woman who took exception to everything I said, she took exception to me just being there. As the session processed she kept up an almost constant stream of negative comments and questions. It was frustrating and made my job difficult, I just wanted to snap at her to shut up and let me finish, but I didn’t. You can’t behave like a dictatorial Sunday School teacher.
A month or so later I saw an item requesting submissions for a book of essays about why people come into nursing and why they stay in it, to be called Nurses on the Run. My submission was called “More Then Making Beds and Emptying Bedpans” and took the frustration I felt doing that teaching session as my springboard. I wrote about the change and revitalisation my career took when I left working in hospital and moved out into the community, and the completely different working environment I found there. Much to my surprise my essay was accepted and the book moved into production.
That was two years ago, book publication is a slow art and can move at what feels like a snail’s pace, but last week I received an email telling me the book was published and available to buy. When I saw that it I felt filled with the same rush of excitement I always get, that excitement that I’ll be able to communicate with so many different people, people I’d never met and who didn’t know me beyond what they are reading. It’s the same excitement I felt the first time I had something published and have done ever since.
Nurses on the Run has its own website were copies of it can be ordered, found at: http://www.nursesontherunbook.com/index.php
I know I might appear biased, but this book comes as a welcome change to all the negative press nursing has been receiving lately, because its aim is to celebrate nursing and why people chose to stay in the profession.
Drew.
P.S. I owe a big thank-you to Karen Buley, the editor of Nurses on the Run. Without her hard work this book won’t have got off the ground. I’m certainly grateful to her.
Posted by Drew Payne at 05:54 No comments: 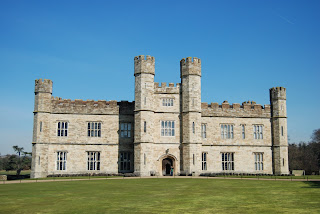 The first week of March we had a week’s annual leave (having to use it up before the first of April). We didn’t go away anywhere, instead we decided to have days out. One of the places we went to was Leeds Castle (which isn’t in Leeds but Kent, very English). Martin had been there before and thought it was a good place to take pictures.
As a child I was regularly taken to different stately homes around the country. My parents felt this was educational and a way to appreciate history, but back in the seventies stately homes were very dull places. As a child, I also had a poor interest in history, it was coloured by poor teaching of it at my school – all dates of battles and nothing about the people who lived through those times. But those stately homes were dull, long rooms with most of them roped off, lots of portraits of people I’d never heard of, and everyone wondering around in hushed tones.
Now, Leeds Castle hasn’t turned itself into an all singing and dancing theme park, it is still a very traditional stately home but what has changed is me. I now have an interest in history, but much more I have a lively imagination and love of literature.
The Castle itself is laid out as also a tour through time periods. You enter through the medieval part of the castle and pass through room after room, going through Regency Period, then Victorian and finally ending in the section of the castle that was modernised in the 1950s, the last time the castle used as a dwelling.
It was like passing through different rooms from different literary genres. The medieval rooms, all stark decoration and stone floors (rugs on the walls and no indoor plumbing), were straight out of a drama of medieval lust and intrigue: A Man for All Seasons, The Other Boleyn Girl or even The Tudors. The Victorian rooms could have easily been the setting for a Victorian Gothic tale, the ones Sarah Walters writes so memorably. But it was the rooms from the 1950s that left the most lasting impression on me.
These rooms, with their bright furnishings and straight angular lines, seemed the perfect setting for an Agatha Christie novel. The elegance and opulence of these rooms could have been taken straight from the pages of one of her stories. The bedroom with swathes of crushed velvet, were the figure on the bed isn’t sleeping and can’t be woken up. The corridor, with its panelled walls, were a hysterical maid runs down. The drawing room, populated with square furniture and an overlarge grand piano, were all the suspects sit and nervously wait for the Chief Inspector from Scotland Yard to arrive, while the body in the bedroom grows old.
Yes, I have an over active imagination but so far it has not harmed me, much. It has helped me through many overcrowded tube rides, all those times when I’ve been kept waiting for an appointment and countless of my family’s events. Also, I can turn some of my imagination’s wondering into fiction.
Also, at Leeds Castle Martin took some wonderful pictures (one them illustrates this blog). They can be seen at http://martins-day.blogspot.com/
Drew.
Posted by Drew Payne at 14:57 No comments: