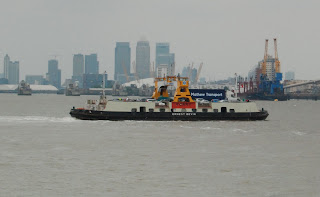 On Saturday, two days ago, I did something I’d never done before (pause for innuendo); I rode on the Woolwich Ferry (twice).

The Woolwich Ferry is one of the many of London’s hidden little treasures. It’s a ferry that crosses the Thames between Woolwich Arsenal and North Woolwich. That might not sound very interesting but it’s the only crossing of the Thames between the Blackwall Tunnel and the Dartford River Crossing (if that doesn’t sound impressive look it up on Google Map, it’s no small distance) and it’s free (very important).

We used it becausen we wanted to go to Woolwich Arsenal (the opposite side of the river from us) and both the tube and the DLR were both suspended for engineering works so we decided to use the ferry, a first for both of us. I was surprised at how quick and easy it. The ferry’s got two levels; cars and lorries perch rather alarmingly on the top deck, which in truth is the top of the ferry, while the pedestrian passengers sit downstairs, with some protection from the cold river wind. We were pedestrians, hence it was an easy journey for us while the vehicles had to queue to get on.

The handful of minutes it took us to cross the Thames took me back. I grow up in Liverpool and many times I crossed the Mersey using the ferry, especially as a teenager, and it was quite strange how similar those two journeys were, at least in my memory. When I was teenager I would ride that ferry, sitting on the wooden benches, on my own, and feel so isolated and alone. Back then I was so unhappy and desperate to fit in with the world around me. I would spend hours on my own because I didn’t belong anywhere.

Saturday wasn’t a re-living of those ferry trips, back in Liverpool. The ferries felt very similar inside but I didn’t. I was travelling with Martin, my partner, and I certainly wasn’t alone. I know where I belong and I’m very happy with that. So much has changed since I was a teenager and I’m so deeply grateful for that. Sometimes things remind me of the person I used to be but I’ve got no desire to go back. Not for me is the glorification and desperate longing for my teenage years, I’m far happier now.

P.S. The picture accompanying this blog was taken by Martin, last Saturday.
Posted by Drew Payne at 21:14 No comments: