Just A Quick One.

Just a short blog to say that I’ve had something else published.

This week’s copy of Nursing Standard contains one of my reviews. This one is of a website, C3 Collaborating for Health. I’m afraid that I wasn’t very impressed by the website, it seemed set-up solely to promote some very elitist and expensive health conferences – the type of conference only very senior healthcare managers can afford to go one. But, they liked my review and published it.

I’ve had a full article accepted by Nursing Standard too, will blog when its published; plus yesterday Gazebo accepted one of my short stories, again more on that when I know the publication date. 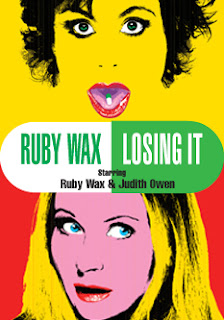 Yesterday, we went to see Ruby Wax’s two women show, Losing It. Again, it was another autobiographical show, but fortunately Ruby Wax has something very interesting to say.

The format of this show was simple, Ruby Wax told her story and Judith Owen supplied the accompanying songs and music; but this wasn’t Ruby Wax talking and then stopping for one of Judith Owen’s songs. Almost seamlessly, the two women slipped between Ruby Wax’s monologue and Judith Owen’s songs, both perfectly complimenting each other.
The theme is Ruby Wax’s experience of depression. Not just what happened to her when she had a mental breakdown but what lead up to this. It was an almost cautionary tale of the damage that fame can do to someone, especially when fame starts to slip away from someone who was once on the top of it all. Her view of fame is unflattering, especially the things she tried to do to keep that fame (She described it as addictive as Crack Cocaine), also her account of the little she had to do when she was famous was also unnerving.
Her description of her breakdown was all too real, the sudden stop in her hectic activity then fall into a deep and unmoving depression. Her depression was a real depression, not the kind so often portrayed in fiction, which is no more than feeling a little blue or down. Her depression robbed her of energy, her personality and her desire to do anything.
Fortunately this show portrayed depression in all its reality. This wasn’t a show were Ruby Wax turned her mental problems into a tragedy on the lines of “poor little me, how terrible it was”, or a “look how funny mad people can be”; neither was this a new-age-spiritual-journey whereby she becomes a “better” person because she fought depression. This is an uncomfortable but unsentimental look at one woman’s experience of depression.
Ruby Wax has a very engaging and animated stage presence, her energy levels during the show pushed it forward in a way that held your attention, yet when she was slowed down by depression it was almost heart-breaking. Judith Owen’s songs were a perfect addiction to Ruby Wax’s monologue, not drawing away from it, and delivered in a clear and soul voice. 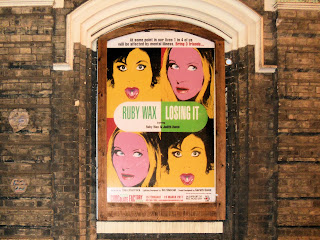 The moment telling moments came in the Q&A session after the show. Ruby Wax was asked did coming through depression make her a better person, she flatly replied “No”. I wanted to cheer with relief. So often people will talk about how depression can make someone more caring, compassionate or whatever, ignoring the pain and suffering that mental illness leaves in its wake. I was so grateful for her honesty.
Hopefully people will come to see this show because of Ruby Wax’s fame but I hope they’ll leave with a better understanding of what depression actually means, Ruby Wax is certainly able to deliver that.
More details on Losing It can be found at these websites:
http://www.rubywaxlosingit.co.uk/
http://www.facebook.com/losingitshow?sk=wall
Drew.
Posted by Drew Payne at 19:55 No comments: 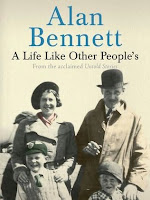 Yesterday was World Book Night, and part of that they’re giving away books free. They requested people to volunteer to give away the books. Both Martin and I applied to this but only Martin was accepted (“mutter... mutter... mutter”). He was given forty-eight copies of the book A Life Like Other People's by Alan Bennett.
This long memoir was originally as part of his book Untold Stories and is the story of his parents’ marriage, but told in the context of their time and their family relationships. It’s a fascinating tale, as Alan Bennett places his parents’ marriage into the social context of their times, from their marriage in austere 1930’s Britain, civilian life through the second World War, through the changing social times of the 1950’s and 1960’s, and their retirement in the very different 1970’s (his parents’ fantasy of what a cocktail party involved was truly priceless).
First reading this memoir I was struck by the similarities between this and my parents’ lives, their relationships with own their siblings. Alan Bennett obviously had parents and family who liked to tell their stories, recount their lives; and the writer in him listened and remembered.
I wasn’t as fortunate, my parents would tell stories about their childhoods, but they were often along the lines “it was so much better when we were young”, my parents were great fans of the rose-tinted nostalgia, but they rarely told stories about how they met, about their wedding, their move to Liverpool, the birth of their children, etc... My mother did tell me some details when I was an adult, actually after I qualified as a nurse (after this my mother seemed more open with me over many subjects), but often these were only passing comments.

My parents met because they both lived on the same street in Barrow-in-Furness, though my mother first went out with my father’s older brother, Arthur, before dating my father. I have always wondered about this. What didn’t my mother like about my Uncle Arthur, though him and my father were very alike, how did my father feel dating his older brother’s ex-girlfriend, was he jealous of his brother for dating the woman he wanted? What were the dynamics going on at the time?
Both my parents are gone now so even if I had the chance to ask all my questions I can’t; but that still doesn’t stop my mind wondering about all of this.
I believe that we are very much the product of our upbringing and our environments, but that often we ignore this or even down place it, but also our environments change as we do.
Drew
Posted by Drew Payne at 13:45 No comments: 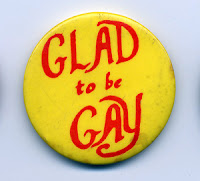 Previously, I have written in this blog about the watershed moment, as a teenager, when I first heard Tom Robinson singing “Glad To Be Gay” (http://drewpayne.blogspot.com/2007/08/one-of-those-moments.html).

Last week I was surfing the web, when I stumbled upon a website that had, for download, had almost all the different versions of “Glad To Be Gay” there has been (http://gladtobegay.net/). With a delight I started to listen to them, but I didn’t get far.

The very first version was an upbeat, celebration. Then, Tom Robinson re-wrote it as a protect song. The first version of that was the one I heard him singing on the television. Listening to it again took me right back to the early 1980’s, when I was still terrified of my sexuality. The song took me back to that time, a time when homophobia was almost at plague levels. 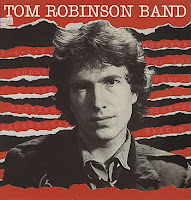 The song deals with the police persecution of lesbians and gay men, the rank homophobia and hypocrisy of the British press, queerbashing, and society’s homophobia that generates internal homophobia. The images in it were harsh and angry, yet all too real. Back then, I was terrified of all those, the world seemed a very homophobic and threatening place; listening to it I felt that stab of sadness because I remembered it all.
So much has changed and in such a short space of time, within my living memory, and for that I am very grateful. But listening to “Glad To Be Gay” reminded me of how bad things were, and they have been worse before that. As grateful as I am for all the equality gains we have now I also feel we shouldn’t forget from where we came.
Drew.
Posted by Drew Payne at 22:02 No comments: