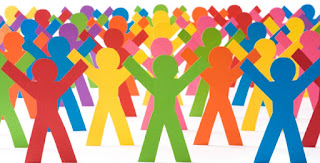 We’ve had the Equality Act since 2010 (1) and for many LGBT people it has been a game changer. It requires that anyone providing a service for the general public, including healthcare providers, does not discriminate who they provide that service to, no more “We don’t serve your sort in here, this is a family establishment.” In October 2017, NHS England has only just waken up to the fact the Equality Act also applies to the NHS, and in response they have released their latest initiative.

They announced that they want all patients’ sexuality recorded, with their other demographic details (2). So at every face to face encounter with a patient with doctors and nurses and all healthcare professionals have to ask patients what their sexuality is, if it does not already state so on their demographies. Patients do have the opinion to decline to answer.

But this is NHS England’s only response to the Equality Act, to gather data on patients’ sexuality, nothing more. We’ve had several studies, in recent years, about the poor treatment LGBT patients have received from the NHS, there have also been studies into what an unfriendly working environment for LGBT staff the NHS is.

Back in 2007, Stonewall published their study Being the Gay One (3), on the homophobia faced by staff working in health and social care, it was more than an uncomfortable read. Since then they have published four different studies on the experience of LGBT patients in the NHS (4, 5, 6, 7) and all of them have highlighted the negative and homophobic experiences they have received, with many LGBT patients unwilling to be open about their sexuality for fear of homophobic treatment from healthcare professionals.

In 2015 Stonewall published Unhealthy Attitudes (8), their report into a survey of LGBT healthcare staff. The findings of this report showed so little had changed since 2007, and Stonewall’s first report (3). Unhealthy Attitudes found that 25% people surveyed had been the victims of homophobic abuse at work. Last year a BMA study found that 70% of LGBT doctors had experienced homophobia at work, and three quarters of them had never reported it out of fear of reprisals (9). Last year we had the unpleasant sight of NHS England itself going to the High Court to win the right not to fund the HIV preventative drug PrEP (10).

Yet we also have areas of good practice and there are resources out there for NHS Trusts that want to turn around this situation. In 2012 Stonewall published Sexual Orientation, A guide for the NHS (11), which is full of practical advice for combatting homophobia in healthcare. Back in 2009, the Department of Health produced Sexual Orientation: A practical guide for the NHS (12), which was designed to help reduce the healthcare inequalities faced by LGBT people. 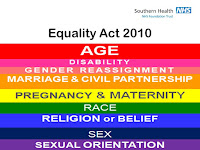 We already have a lot of evidence about the homophobic treatment many LBGT people have received at the hands of the NHS, NHS Choices acknowledged the problem back in 2012 (13), there is also guidance on how to reverse this, and yet all NHS England can think to do to combat healthcare homophobia is to ask patients what their sexuality is. A third of gay and bisexual men are not open about their sexuality to their GPs (7) and half of Lesbians and bisexual women (5). Why isn’t NHS England launching a high profile initiative to tackle homophobia in the NHS and to make it a welcoming place to LGBT people? Why isn’t NHS England ensuring that the NHS complies with the Equality Act? Instead all they can do is collect data on LGBT people. So typical of NHS England, too little and much so late.

But why should nurses, be concerned about this? How can we say we are providing open and non-judgemental nursing care when so many LGBT people are afraid of being open about themselves in front of us?

(This was originally written for the Nursing Standard)

Drew Payne
Posted by Drew Payne at 18:51 No comments: 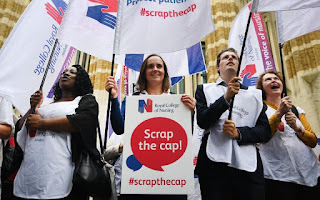 In one speech in Parliament, Jeremy Hunt scrapped the hated 1% cap on NHS staff’s pay rises (1), the cap that saw staff’s pay cut in reality. With one speech the seven year old pay cap was gone.

When Hunt was questioned by MPs, he wouldn’t say what pay rise NHS staff could expect, he wouldn’t say if he’d got the Treasury to fund a pay rise, but he did say that any pay rise would be linked to “productivity” (4).

Only a few months ago, Chancellor Philip Hammond was reported as saying, at a cabinet meeting, that public sector staff are overpaid, being paid 10% above their private sector equivalents (5). Now this is not true and is a distortion of the facts (6), which is unsettling enough for our Chancellor of the Exchequer to do, but it does show Philip Hammond’s attitude towards NHS staff’s pay. In his last budget he provided no increase to NHS funding (7).

A decent pay rise for nurses is urgently needed, and not just as a selfish pat on the back. The NHS is haemorrhaging nurses. There are 40,000 full-time equivalent empty nursing posts in the NHS, 1 in 9 of all nursing posts (8), Janet Davies (General Secretary of the Royal College of Nursing) directly linked these empty posts to low pay and high workloads forcing nurses to leave the NHS (9). Since the pay cap was started in 2010, nurses’ pay has fallen in real times by 14% (10), which equates to nurses being at least £3,000 worse off each year (11). Fourteen unions, including the RCN and Union, have called for NHS staff to receive a 3.9% pay rise (12), which only seems fair to me.

In his announcement, Hunt did talk about any pay rise being linked to “productivity”(4), which is unbelievably arrogant. The NHS would be in a far worse state if it wasn’t for the dedication for its staff. This year we’ve seen NHS staff, and especially nurses, going above and beyond their roles when faced with the aftermath of terrorist attacks and disasters; the Finsbury Park mosque attack (13), the Grenfell Tower fire (14), the Manchester Arena bombing (15), Royal Stoke University Hospital fire (16), and the Westminster Bridge and London Bridge attacks (17). But it isn’t just the nurses responding to national disasters, like so many other NHS staff, its the extra work that nurses provide on a day-to-day basis that is holding the NHS together. This isn’t just my opinion, Sir Robert Francis QC, the chair of the investigation into the Mid Staffordshire NHS Trust scandal, earlier this year said the NHS was only being held together by the “superhuman effects” of its staff (18).

But I think Hunt’s reference to “productivity” is something different. During his speech to the Conservative Party Conference, Hunt announced that he wants to pilot an app whereby staff can be called in to fill shifts at a short notice (19). Sound familiar? He wants to introduce an Uber like app were staff will only work when they are needed or staff will be called in to work on their days off. Is this how we want to work and is this safe for patients? I wouldn’t want to be looked after by a nurse dragged into work on their day off. But I fear accepting this app maybe a condition of receiving a pay rise next year.

There is also the question, who will fund any pay rise we’re offered next year. Neither Hunt or Philip Hammond have announced any extra funding for the NHS, and Hammond’s attitude shows he’s unlikely to do so (5). NHS Trusts cannot afford to fund any pay rise. Simon Stevens, the chief executive of NHS England, told the Commons cross-party health select committee, after Hunt announced he’d scrapped the cap, that the Government will need to increase the NHS’s funding to met any pay rise because Trusts’ funding is far too stressed to do so (20). I suspect that we will get a pay rise and then Hunt will announce that we will only receive it if there are substantial cuts to fund it. This is an approach he’s used before.

At the beginning of the year, during a speech, Hunt said he wanted to increase staff’s pay but he “couldn’t” because that would take money away from recruiting more doctors and nurses (21). In 2014 Hunt vetoed a 1% pay rise for nurses, saying that to fund it would mean losing 15,000 nurses from the NHS (22). This was an out-and-out lie. After industrial attack, Hunt backed down and we were awarded a mere 1% rise (23), and strangely enough no nurses were sacked to fund it.

I fear that Jeremy Hunt’s announcement that the cap has been scrapped is nothing more than spin. The Government needed some good news and so Hunt’s announcement, without any funding or guarantees behind it. I fear that the wage cap has only been replaced by spin, emotional blackmail and demands for us to work even more unrealistically harder. With Hunt still in charge, I’d be very surprised to get a pay rise next year above 1%, and certainly not one without a lot of strings attached.

Drew Payne
Posted by Drew Payne at 14:12 No comments: