(And now for some silly and fictional humour)

Stephanie Myers has written the last twilight novel, well for now, and JK Rowling has finished the Harry Potter saga, until her next novel bombs. So Persephone Hebdon-Bridge, author and inbreed middle-class floozy, has written a new saga to fill the void, The New Midnight, Eternal Love Saga, which she’s confident will soon become an international movie franchise.

The Twilight books had a vampire as its hero, Harry Potter was a wizard. Persephone Hebdon-Bridge has chosen, as her hero, a far older and more elemental mystical being. A man, Jeremy, who is un-dead.

Her heroine is a young gal, on the verge of womanhood, a mere eighteen years old, from one of the best Home Counties’ families, Tamara.

Tamara is tired of the usual sweaty palmed and chin-less boys she meets at the tennis club and the Young Conservatives’ Barn Dances. So, when one night, on the way home from an England for the English meeting, Tamara meets the tall, dark, handsome and un-dead Jeremy. It’s love at first sight.

Tamara pulled her Porsche 911 to a stop, at the side of the country lane, in the heart of England. God’s own country. Where the ancient Oak trees spread their two hundred year old branches protectively over the lane. Their leaves cast a dappled pattern over Tamara’s high-end car.

Tamara turned to the handsome passenger next to her. The moonlight fell upon his face, turning his green skin to a pale olive. His eyes, in that moonlight, shone a deep gold, rather than their normal demonic yellow. In that fading light she could barely see the drool from his rotting, black teeth and his putrefying, grey lips. He looked especially handsome tonight, she thought.

“Jeremy, you’re not like the other boys,” Tamara said.

“You treat me so differently to all the other boys,” Tamara gushed. “You’re not always trying to get inside my Janet Raeger knickers and wanting me to do unspeakable things on the backseat of your BMW.”

“It’s so refreshing that you want to get to know me as a whole person before we give ourselves to each other on a physical level,” Tamara said.

“I feel so squiffy just merely being in your presence,” Tamara said. “I don’t need to resort to mere Champagne cocktails, like the other girls do.”

Jeremy smiled at her, hungrily.

Art is the Best Revenge 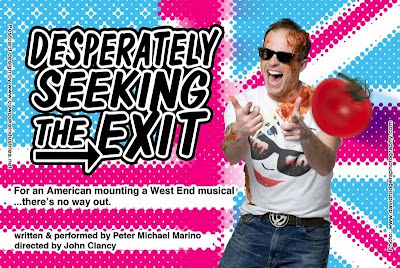 What do you do when you’re in a foreign city, you’ve written the book for a musical but everyone has their own “ideas” about it and aren’t talking to you, you’re smoking so many cigarettes that British American Tobacco shares have gone up 5%, everyone keeps asking you if you’re “all right” when you obviously aren’t, you’re bleeding from the rectum, you throw yourself in front of a bus in desperation but it’s going so slow it doesn’t harm you and Debbie Harry is delighted she “wrote” your musical? You go mad or write a one man show. Peter Michael Marino did both, though not at the same time.

In 2007, Marino wrote the book for the stage musical version of the film Desperately Seeking Susan, with the music of Blondie and Debbie Harry. The show lasted four weeks before closing, not so much flopping as crashing and burning. But was Marino disheartened? You bet. Out of the ashes of that disaster, and after a lot of therapy, Marino had created his one man show Desperately Seeking the Exit.

Fortunately, this isn’t the “pity-me” style of theatre. Marino tells his story with humour and energy, but this is still the dark side of show business. This show is about the failure of a West End musical, the crash and burn of this musical and the effect it had on Marino. But in the same way this isn’t a self-pity show, it isn’t a downbeat and depressing one. Marino has a sharp and lively sense of humour and fills his show with it, making us laugh at his nightmare experience. 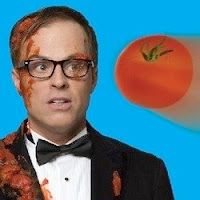 I never knew that producing a musical was such a long twisting journey. Marino’s humour navigates this journey for us, with the constant changing “vision” for his musical, as director, chirographer and then producers all add their “ideas” for how the show should be and Marino’s nightmare deepens. His is a truly nightmarish journey downwards, at one point I even wondered how he survived (when he described a two hour meeting to find an alternative to the word “pot” you knew all hope was lost), this world was as unreal as Lewis Carol’s Alice stories. Marino also proves that, even in the theatre, the writer is at the bottom of pile but the first to be blamed when things go wrong, even when it’s all taken out of their hands (So, not much different then for writers elsewhere).

A lot of Marino’s humour does come from the differences between American and British culture, though his are much more intelligent insights then how we pronounce tomato and the temperature of our beer. At first, I was disappointed to hear so many jokes about our differences but as show when on they served to show his alienation, he was in a foreign country as everything went wrong.

From such dark material Marino has crafted a lively and funny show, with a heart that is all too human. This is a must-see show for Marino’s insights into the madness of producing a West End musical and his always sharp humour. Unfortunately we saw Desperately Seeking the Exit at the end of its run at the Leicester Square Theatre but Peter Michael Marino will be performing it elsewhere so check him out online. Unlike the musical, this is no flop. 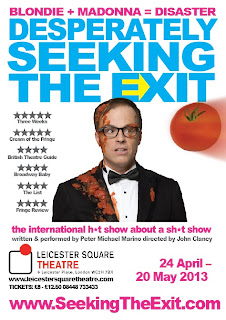 Desperately Seeking the Exit on SoundCloud

Desperately Seeking the Exit on Tumblr

How to write a West End flop, BBC online article about the show

Original Guardian review of Desperately Seeking Susan (The Musical), and it’s not good.

Drew
Posted by Drew Payne at 19:53 No comments: