That Once A Year Day 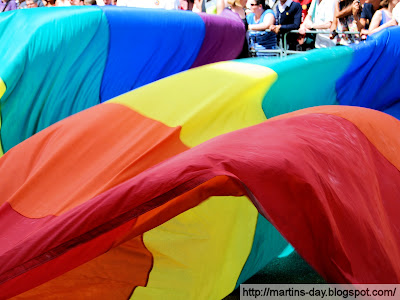 Last Saturday was Lesbian, Gay, Bisexual and Transgendered Pride March, that annual event went the queers take to the streets of Central London.
I’ve been going to the Pride March ever since I could (I moved to London two months after the 1987 March and so had to wait nearly a year to go one my first one). Back in 1988 it was a very different event. To start with it was a much smaller march (Saturday saw over a million people in London for Pride) but also it much more political tone, people chanting and a lot more banners with slogans on them. The route was lined with police, many of them looking decidedly nervous. But this was 1988 and it was a very different time, the Government was opening using homophobic rhetoric and the press was rabidly homophobic. 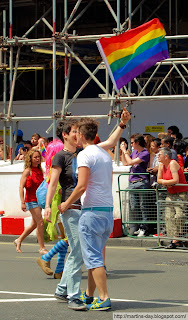 Saturday’s march was very different; it was much more celebratory then political, though it was far from apolitical. There were more police march at Pride then lining the route, there were also Soldiers, Sailors, Air Force Personal, Firemen, Paramedics and Healthcare Staff all on the march (many of them in uniform). There was also far more people dressed in costumes on Saturday. Back in 1988 the people who were dressed up were either drag queens or leather daddies, there weren’t any women in costumes. On Saturday there seemed to be just women dressed up in different and elaborate costumes as there were men.
Things have very much changed over the years, now the celebrities and politicians are lining up to take part in Pride rather than running away from it. Many people complain that Pride is the same as it was, often complaining that it isn’t political anymore. To me, things do change, they can’t stay the same, and the changes in Pride are a good thing. Britain isn’t the same country as it was back in 1988, we have won so many changes and rights and that’s something we should celebrate at Pride. Yes, we still have a way to go but we’re not living in cold climate of homophobia we once were.
Pride has always been something important in my life, something I couldn’t miss it each year, it was a place where I could be openly gay and be in the majority, where my sexuality wasn’t an issue, where I could be surrounded by other lesbians and Gay Men. But, for many years there was also a tinge of unhappiness for me at Pride. I was single and all around me were happy gay couples all holding hands together, it just a re-minded me of how much I wanted a lover. Now, and for over the last twelve years, I’ve shared Pride with Martin. I don’t want to be one of those people who ram their relationship down other people’s throats, but sharing Pride with Martin is should a wonderful thing.
Drew.
P.S. The pictures illustrating this blog entry are just some of the pictures Martin took at this year’s Pride. More of them can be seen on his blog, http://martins-day.blogspot.com/ 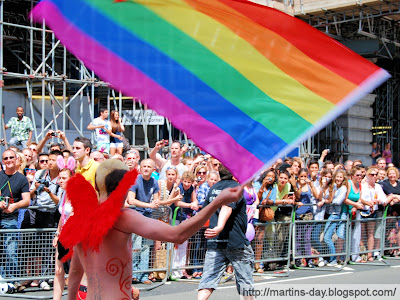