The Joy of Live Theatre 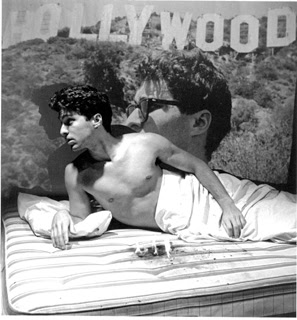 There’s still something magical about life theatre. The performance is happening there and then right in front of us. Unlike films or television, there are no cut-a-ways or re-takes for fluffed lines. The performance is there in a hundred percent reality. The actor’s performance is there before us, all the nuance and emotions are there in the flesh, even if they’re just sitting still they are still performing, there is a live connection with the audience. There is nothing quite like it.

Last Saturday night we went to Tim Miller perform his latest one-man performance piece 1001 Beds, and it was as electric and gripping as all the other performances of his we have seen. The phrase “performance piece” puts so many people off, visions of obscure theatre were everything has “meaning” but only those “in-the-know” understand it, leaving the rest of us bewildered and bored. Tim Miller’s performance pieces are anything but this. His pieces are built up from a combination of his memories and own experiences, political observations (especially around American politics) and amazing flights of fantasy.

1001 Beds takes its starting point and title from the fact that, as a performance artist, he travels a lot and has slept in so many different hotel beds. At first it is a light-hearted look at the strange world of hotels and hotel rooms. But soon he moved onto his own intermit experiences of hotel rooms, especially the first night he spent with his lover Alistair in a London hotel room in 1994. The piece ends with a glorious fantasy about the end of Bush’s presidency.

Tim Miller’s performances are always passionate and full of energy, one single man filling the whole stage available to him. 1001 Beds was no different, with the occasional use of a microphone, he filled the whole of the huge barn-like stage at the Drill Hall Theatre. He even managed to form an intermit bond with us the audience, as we sat there in the semi-dark. When he talked of that first night with his lover Alistair, in that tatty London hotel, his own face was light-up with both love and passion.

The joy of any Tim Miller performance is the passion and energy he always fills them with। 1001 Beds was no disappointment either.
Drew
Posted by Drew Payne at 14:30 No comments:

On 22nd May I blogged about the proposed changes to the way HIV Prevention is delivered to gay men in London (Not So Gay Health), yesterday I found out there has been some interesting developments. The plans that would completely destroy HIV Prevention have been put on hold. There will now be a review of these proposals with a public consultation.

The commissioners agreed that any new commissioning intentions will be: based on analysis of current services, consult with HIV Prevention Organisations, comply with statutory obligations and be overviewed.

The Compact Advocacy Programme at the National Council of Voluntary Organisations (NCVO) have said that these proposals (The unbelievably bad idea of “Health Interviews”) have broken various codes of the Compact Agreement between government and the voluntary sector because they tried to push them through very quickly and with virtually no consultation. An NHS spokesman has said that the commissioners will continue to fund the existing services whilst a new consultation is held.

Full details of the Commissioning Intentions and Public Consultation can be found at www.gmfa.org.uk/londonservices.

I read this with a sigh of relief; somebody had actually stopped and took a look at what was happening. The proposal is still on the table but there is now a level playing field and the extremely good work that has gone before will not be ignored. We now stand a good chance of saving our services. It isn’t over but I’m going to ignore it.

Review Me, Review You.

I have had another review published, again in the Nursing Standard. This one was of a book about the motivations of male clients of prostitutes. It might not sound the most exciting of reads but this review was easy to write. The book was interesting and well written and the authors’ research, which formed the back-bone of the book, was intelligent and well constructed. It was an easy review because I was able to honestly recommend it.

The problem comes when I am given something bad to review, which happened recently. The publications I write reviews for don’t want those bitchy, “this is crap and I wasted my time reading it” reviews. So I had to write a balanced review but still pointing out the flaws of it; I had to shape my arguments in a way that, I hoped, would warn people off this piece of crap – without saying crap. It’s the bad reviews that I find so hard, the reviews of books that are so bad that I just want to scream “Don’t read this rubbish! It’ll rot your brain!”

There is certainly an art to writing reviews, to summing up something in only a few hundred words, backing up your recommendations and balancing your argument so that it doesn’t sound too gushing or too negative; and I feel that I’m just learning how to do so.

Saying all that, I hate those reviews (often find online and/or in newspapers) were the reviewer wants to show off how clever they are, “I can rip this to shreds so easily”, and waste the review doing so without exactly telling us anything about what they’re reviewing। I see this a lot in film reviews. I read the review and at the end of it I still don’t know what the film is about, though I now know what the reviewer feels about the director and how in love they are with the leading actress/actor.
Drew Payne
Posted by Drew Payne at 16:34 No comments: