Boris Johnson and the Art of the Headline Grab 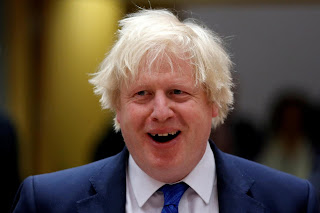 Boris Johnson has never been shy of grabbing the headlines, he has certainly never knowingly turned away from a photo opportunity. When he was Mayor of London, it sometimes felt like all he did was try and grab the headlines, with one stunt after another.

At the end of January the press revealed that Boris would be demanding an extra £100 million a week funding for the NHS, at a Cabinet Meeting (1). That would have resulted in an extra £5.2 billion a year. Now he was quickly slapped down by both Theresa May and Philip Hammond, the Chancellor (2). Since then Boris does been very quiet on the subject, it obviously didn’t get him the good headlines he was after, but it did highlight this government’s failure to fund the NHS or even look realistically at future NHS funding.

This Government has under funded the NHS since 2010. Since 2010, when the Conservatives came back into Government (In coalition then), they have cut the increase in NHS funding to 1.1% (3), after last year’s autumn budget the NHS yearly increase in funding was increased to 1.2% (4). Previous to 2010 NHS funding was increased by, on average, 4% a year since the NHS was founded. NHS funding increases have been cut by nearly 75% and yet demand has not decreased. A&E attendance in December 2017 was up 3.7% on December 2016 (5), and that was just A&E attendance. All areas of the NHS have seen increases in demand, year on year.

This all has had a knock-on effect on the service the NHS can deliver, it’s now failing at all its mayor targets. The four hour A&E treatment target hadn’t been met since July 2015, the 62 day target from urgent cancer referral to treatment hasn’t been met since 2014 and the 18 week target for referral-to-treatment for elective care hasn’t been met since February 2016 (6). Good quality healthcare is not cheap, and repeatedly providing the NHS with below inflation funding increases has a direct affect on patient care. There are no more “efficiency savings” to be made, the fall in funding cannot be absorbed in any other but by cuts to patient care.

The Government had a chance to at least begin turning around this chronic under funding with November’s Autumn Budget. In the run up to the budget there was active campaigning for more NHS funding, at least £4.6 billion to stop the shortfall in NHS funding (6). Simon Stevens, head of NHS England, called for extra funding too, warning that NHS waiting lists will soar to five million by 2021 if its funding isn’t increased (7). Yet when Philip Hammond announced his budget, in November, the NHS only received an extra £1.6 for the next year (8). Officials at the Treasury have leaked to the press that Philip Hammond was angry at all the campaigning for extra funding, especially that of Simon Stevens, and this is why he didn’t provide all the funding the NHS needs (9). I am left speechless with disgust and anger at his petty and vindictive actions. Instead of listening to the reasoned arguments, he followed his ego. What kind of politician is he? Unfortunately he’s typical for this government.

Boris Johnson’s attempt to grab the headlines pushed a much more important NHS policy story out of the back pages. A cross-party group of ninety MPs wrote a letter to Theresa May calling for a cross-party convention on the future of the NHS and care social and the funding they will need (10). The letter was organised by Sarah Wollaston, Conservative MP and chair of the Commons health committee, Norman Lamb, Libdem MP, and Liz Kendall, Labour MP (11). It was signed by 90 MPs from all parties, a third of them were Conservative MPs (11). This was a golden opportunity for Theresa May to tackle the problems dogging the NHS and to do it with the full support of Parliament. This would have provided cross-party support for raising taxes to fund the NHS. So far the Conservative party has shied away from raising taxes, seeming to fear losing political face doing so, but with cross-party support all parties would have taken the “hit”. This was a political initiative that has been long overdue. But Theresa May, in her usual limp-handshake-way, dismissed this call for cross-party action, saying the government were managing the NHS themselves (12). Another typical failure and missed opportunity by Theresa May, and I’ve lost count of how many there have already been.

70% of Conservative voters, in a recent pole, said that the NHS was their main concern (13), and yet this government constantly ignores the problems of the NHS staring them in the face. Even when their own supporters are worried about it, it still doesn’t appear as a high priority for this government. Theresa May does not seem very bothered about it and rarely comments on the NHS. What have we done to deserve politicians so apathetic and uncaring about the NHS? For so many voters, the NHS still remains such a major concern, but to listen to our politicians you would think that there were no great problems with the NHS, beyond a few people moaning about it.

What can we do to finally make this government take the NHS’s problems seriously? Yet another winter crisis in the NHS certainly hasn’t done that (14).

As for Boris Johnson. During the 2016 EU referendum the Leave campaign, which he was the leading light of, claimed that £350 million a week extra funding would go to the NHS (15). Last month Boris only called for an extra £100 million a week for the NHS. So it seems his concern for the NHS has fallen by over 70%. As I said, what can we do to make these politicians take the NHS seriously?

Drew Payne
Posted by Drew Payne at 22:21 No comments: