Waiting for My Father 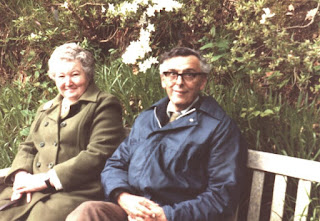 The room was quiet; the only sounds there were small and slight, ones that would not normally have been noticed except for the silence there.

There was the mechanical noise of the little pump occasionally leaping into life as it delivered another dose of painkillers. There was the hiss of air escaping as the air mattress slowly inflated and deflated. There was also the sound of his breathing, slow and almost rasping as he drew in air through his parted lips, held that air in his lungs for what seemed like an age, and then slowly exhaled it.

He looked so small lying there in the middle of that hospital bed, almost lost in all those clean sheets. His eyes were closed, as they had been for so long now. His skin was dry and pale, it had taken on a grey pallor, while thick and dark stubble was pushing through his chin. His hair, only now thin and wispy, thinned out only by the chemotherapy and not by aging or baldness, was disheveled, more pushed back over his head than brushed into any style. My mother would have cast a sarcastic comment about his appearance if she had been here.

My father was dying and all I could do was sit there at his bedside and wait.

At first, I had sat silently by his bed, simply waiting on him. Doing anything else felt almost disrespectful. Unfortunately, boredom and distraction soon set in. At first, I just casually glanced at a magazine, a distraction as I flicked through its pages. Then I read one article from it, the one that had snatched my attention. Then I read another article, and then another one, and then I had read it from cover to cover. Finally, I swallowed my good intensions, took out the novel I had been reading on the train up there, and started reading it.

As a nurse I had nursed many dying patients before and there had been so many different things to do, I had been kept busy with my tasks.  I wasn’t a nurse here, I was a relative, I was his son, and all I had to do was wait. As a nurse, I had watched so many relatives doing this, sitting at their relative’s bedside and waiting, and my heart had gone out to them. Now it was my turn and I felt so useless. All I could do was sit there and wait; nothing practical or positive about it.

My sister had organised a kind of rota so that she, my brother or I would be sitting next to my father’s bed, keeping him company, making sure he was not alone. I had travelled up to Liverpool, from my home in London, when he was admitted to the hospice. When I arrived, he was tired and weak and barely responsive. By the Saturday afternoon he was completely unresponsive, he was unmoving in his bed, he had stopped eating and drinking, and his eyes were now permanently closed. He seemed to be waiting for something, but what? His three children were at his bedside, who was he waiting for?

My mother had died two years before from cancer. Her death had been quiet and quietly organised, like so much of her life had been. She had made so many arrangements and kept so much to herself. But at the end of it all, after her death, my father had been left on his own, and that was the last thing he had expected.

Unfortunately, again, like so many men of his generation, my father didn’t have the emotional or psychological knowledge to survive being widowed. He hadn’t just lost his wife of nearly fifty years, but he had lost his close companion, his friend throughout so much, he’d also lost the person who had organised so much of his life and the person whose council he’d always trusted. This broke him because he couldn’t cope with his loss.

Grief made him angry and nasty, how could we be happy, how could we carry on as normal? He was angry at me, snapping at me and saying the most hurtful things. I’d lost him to the anger of grief. Martin and I had only been together a few years then and I’d wanted him to get to know my father, but that wish was now gone. My father had been replaced with a bitter and angry old man. It felt so unfair. Some uncaring person had told my father that he’d get over the loss of his wife, someone who didn’t really knew my father, and this had only made him even angrier. A loss like his someone would never “get over.”

That Saturday he was dying in his hospice bed, but he had started dying two years before when he lost my mother. It had been the day after my mother’s funeral; he had been such a lost and angry little old man. It had been heart-breaking and I’d not known what to say. Were there any words I could have said?

On the Friday afternoon, my sister’s vicar had visited my father. The man clearly said that he’d seen many people in my father’s situation who had got better, got up out of bed and lived for years. The man’s naked denial had almost taken my breath away. I said that my father was dying, his hands and feet were icy cold because his circulation was slowing and failing, his internal organs were failing; he’d never get better. That vicar told me off for denying hope. He knew better than me, he was an ex-policeman and now an Anglican vicar, I was only a nurse. I was left feeling angry and frustrated, what was the use of this vicar?

I spent Sunday afternoon was my friends Loraine and David. When they heard what was happening, they invited me for Sunday dinner and a break. I did my nurse training with Loraine and now she was married to David, an Anglican vicar, and they were living in Liverpool then. When I arrived at their home, at lunchtime, David told me he had prayed for my father at their morning Eucharist service, he’d prayed that my father’s suffering would end soon. I could have hugged him for that, I wish I had.

That afternoon, after a wonderful Sunday dinner, we sat around and talked about books and gardening and fish ponds. Loraine and I gossiped about the people we trained with. Their dog made a big fuss over me. As I sat with the dog on my lap, patting him, I realised it had been days since I had touched anyone else, I had barely shaken hands with anyone.

When I returned to the hospice that Sunday evening, my father was still lying there in the middle of that hospital bed, breathing in that painfully slow way. He was still waiting for something, just hanging in there. 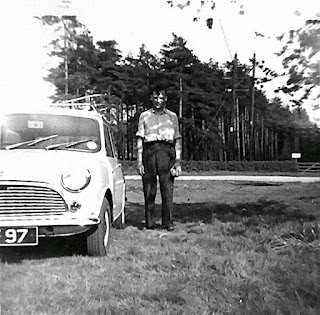 He died the following Wednesday morning and I wasn’t there.

Later I mourned, my father was gone and it felt strange and uncomfortable and very awkward. I went back to work too soon and had to be sent home when I burst into tears, apologising for the fact that my father had died.

It was only after his funeral that the realisation came to me when I compared the dates. My father had died two years and two months to the date, almost to the hour, after my mother had died. That’s what he’d been waiting for.

Drew
Posted by Drew Payne at 16:29 No comments: 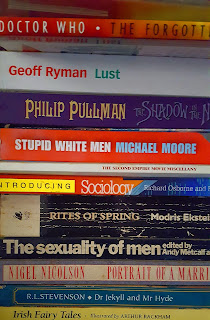 As spring approaches, here are five of my book reviews to tempt you with something to read.

And Then There Were None by Agatha Christie

This book is by far Agatha Christie’s best selling novel, is the world’s bestselling crime novel too, and all for a reason, a reason I agree with.

A HIV treatment manual that is worth the read.

Dorothy L Sayers’s sleuth, Lord Peter Wimpsey, has fallen in love, unfortunately his beloved is on trial for murder.

The Lost Language of Cranes by David Leavitt

The Lady in the Van by Alan Bennett

Alan Bennett has adapted thisstory  into a play and later a film, giving Maggie Smith one of her best roles in years, but this book is where the legend of Miss Shepherd all began.