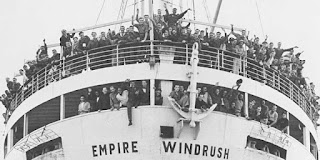 The Windrush scandal (1) is certainly shocking. When I first heard it I was both sickened and angry, was this the way to treat people who had given their lives working for this country, many of them in not very well paying public service jobs. It was disgusting. But as the scandal progressed I got a horrible sinking feeling. The Windrush scandal was replaying the British attitude to immigrants, we will let them come here to do the jobs we cannot get anyone else to do but we will not fully welcome them into our country and don’t want to give them full citizen rights.

At the time all this broke there was another immigration scandal that slipped under the radar. Last month 100 doctors from Indian had their visas refused and were turned away from entering the country (4). Those doctors already had jobs, they were part of a scheme to place doctors with North-West NHS Trusts (5), and NHS Employers have said that since December there have been 400 other cases (5).

The Home Offices has monthly quotas for the numbers of visas it issues for skilled non-EU workers wanting to enter the country (6). Two-thirds of these are skilled medical professionals coming to work for the NHS (6). Yet last month that quota was reached for the third month in a row (6) and anyone else who wanted to come and work here was automatically denied a visa, even if they were desperately needed medical professionals coming to work in the NHS. A whistle blower, in December. Claimed that the Home Office prioritises visa applications by how much money they will earn the department, i.e. which visas carry the highest fees (7). The fees for student visas and spousal visas are much higher than the fees for a working visa (7).

Since the referendum vote we have seen a shocking fall in the number of EU nurses coming to work here, and a rise in them leaving, shown by the Nursing and Midwifery Council (NMC) numbers. Between April 2017 and March 2018 29% more EU nurses left Britain than the year before (11), and that was three times higher than in 2013-2014 (12), the first time the NMC recorded these figures. The numbers of EU nurses coming to Britain, between April 2017 and March 2018, was 87% less than the previous year (11). We have been haemorrhaging EU nurses since the Brexit vote. Janet Davies, the chief executive of the Royal College of Nursing, has blamed this exodus on the badly organised nature of Brexit (12). She said that the Government’s refusal to state what the rights of the three million EU citizens living here will have when we leave the EU is causing so many EU nurses to leave ahead of it all (12). And I have to agree with her, since the referendum, Brexit has created a toxic environment for EU citizens living here and our Government seems intent on doing nothing about it.

We are seeing many attempts to recruitment nurses from outside the EU. Oxford University Hospitals NHS Foundation Trust (13), North West London University Healthcare NHS Trust (14), the Heart of England NHS Foundation Trust (15), Whittington Heath NHS Trust (16) and Barts Health NHS Trust (17) have all been recruiting nurses from India and the Philippines, and these are only the ones I found on a simple Google search. I am certain there are many, many more Trusts also trying to recruit nurses from non-EU countries. Even the Department for Health and Social Care is getting in on the act. Through Health Education England, a scheme was announced last year to recruit 5,500 overseas nurses, from India and the Philippines (18). The scheme was expanded to include Jamaica (19). But there is an uncomfortable fly in the ointment here. Oxford University Hospitals NHS Foundation Trust (13) reported that 40% of overseas nurses offered jobs would not unlimitedly take up those offers due to the immigration processes and language checks. This is a very high and very expensive drop-out rate, back in 2015 it cost £3,000 to recruit a non-British nurse (20) – I wasn’t able to find anymore up-to-date figures than these, it’s as if Trusts no longer want it known how much they are now paying to recruit overseas nurses. Oxford University Hospitals didn’t say how many recruited nurses dropped because of difficulties with getting a visa and how many were rejected for visas, but a 40% drop-out rate is shockingly high.

There is another issue to consider with all this overseas recruitment, Britain isn’t the only country with a shortage of nurses. The World Health Organization (WHO) estimates there will be a global shortage of 12.9 million healthcare workers by 2035 (21). The International Council of Nurses (ICN) interim chief executive Thomas Kearns warned Western countries not to “drain” developing countries of their nurses, but to focus on their “homegrown” nurses (21). As British Trusts actively recruit nurses from India, the Philippines and Jamaica, what affect will this have on their own healthcare systems. We have 40,000 empty nursing posts and the NHS is not coping with this burden, how will a developing country cope with this shortage of nurses, they certainly cannot recruit from over countries the way we can, the shear expensive of doing so. Britain isn’t the only country recruiting nurses from developing countries. Do we have the right to just see these countries as a mere stockpile of nurses to be recruited from, and “drain” them of their own resource, their nurses.

For as long as I have been a nurse, the NHS has recruited nurses from abroad, mainly from EU but also from non-EU countries too, long before Brexit, but we need to develop an ethical approach to this. The Department for Health and Social Care scheme to recruit nurses from India, the Philippines and Jamaica is being painted as “ethical” recruitment (19). Nurses will be recruited from these countries for a fixed term, and while here they would work and learn new skills, skills that they will then take home. How affective this will be is still unproven. The nurses will work here for three years. How many employers will want to invest in sending these nurses on specialist training when they will work for the Trust for only three years? Their skills training may boil down to “on the job training”, just working as a nurse in Britain, which also sounds rather patronising.

The Government needs to take seriously the skill shortage in the NHS and make the process user friendly. All nursing posts are on the Shortage Occupation List (22), the list of occupations the Home Office gives priority to when considering issuing working visas, doctors are considered by the specialist skills they have. There are 150 different Standard Occupational Classification (SOC) codes on the list, the different jobs and occupations that the Home Office gives priority to when issuing working visas (22) (I physically counted them and there maybe occupations on the list that I missed, it wasn’t an easy list to count). Actors, dancers and musicians are also on this list. The Government web page about Shortage Occupation List (22) does not state that any occupation is given priority, so when the monthly quota is met people are flatly denied visas, no matter what their profession is or how despair we are for people with their specific skills (doctors and nurses).

But Theresa May does not seem to be taking this issue seriously. At the end of April, she overruled calls from members of her own cabinet to relax visa quotas for doctors coming to work in the NHS (23). She was lobbied by the Health Secretary, the then Home Secretary Amber Rudd, and the Business Secretary, but May ignored them all and refused any visa quota relaxation for doctors, what hope is there she’d consider nurses as a priority? Neither has Theresa May and her government clearly stated what rights EU citizens, living in the UK, will have after Brexit (24). In some statements EU citizens will have less rights and in other statements EU citizens will have the same rights as they do now (24). There are so many contradictions coming out of this government that no wonder EU citizens living here fear for their rights post Brexit (25), especially now post the Windrush scandal (25). If the government can treat Windrush people in the way they have done, what is there stopping them treating EU citizens in the same way post Brexit? No wonder we are seeing an exit of EU citizens, especially nurses who are in demand in other EU countries (26).

This government certainly does not seem interested supporting “homegrown” nurses as Thomas Kearns warned (21). After eight years of pay austerity the government’s pay offer to nurses, this year, takes away more than it offers (27), and could see nurses losing more pay in real terms. The government’s reaction to the 40,000 empty nursing posts has been pitiful. They abolished the bursary for nurse training (28) and since then 14% fewer people have applied for the September 2018 intake than did last year, and last year saw a 30% reduction on 2016 (29). The government has done NOTHING to encourage nurses to stay working for the NHS, many Registered Nurses are leaving because of the high workload, poor working conditions and stagnating pay.

Nursing and the NHS are in crisis (30) and still this government does NOTHING about it. Is Brexit taking up all the government’s ability, time and resources? If so then this is the worst government on record. A government should be able to multitask, that is the nature of government, governing requires being able to do many different things all at the same time, and hopefully all of them well. This government is blindly ignoring the crisis in nursing and therefor ignoring the terrible cost this is taking on patient care. But why they doing this? Was Theresa May treated harshly by a nurse when she was a child and this is her revenge? Or is it more likely that they are ignoring it all because they are too incompetent to actually tackle the problem head-on? Whichever way patients will suffer until they do something… But I do not hear any action coming from this government any time soon.

Drew Payne
Posted by Drew Payne at 17:41 No comments: