Look At All the People Looking All The Same 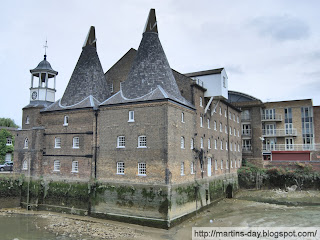 Last Sunday, Martin and I went to Three Mills Island, just up the road from us at Bromley-By-Bow. We went there so Martin could take some photographs (One of them illustrates this blog). It’s one of our interesting local places.
When we arrived there we found that it was already full of people and, without even hearing them speak, I knew they were from a coach party. Just by their appearance, they screamed that they were on a coach trip. They were “sensibility dressed”, laced up shoes, casual trousers and anoraks (the women as well); were sat together in couples and small groups; eating their packed lunches and drinking from thermos flasks.

As we wondered around, Martin taking his usual hundreds of photographs, I watched those people from the coach party (and they were a coach party because their coach turned up and in an orderly line they boarded it). They were so obviously alike, as if they had to look and behave this way to be accepted on the coach trip. Which made me think about how we want to belong to a group or crowd, and so often we do that by the way we look and dress. The first time I went to Lakeside Shopping Mall I was shocked by how alike almost everyone there looked. When we’re in any shopping mall I often watch the people around me and how alike those groups are, especially the teenagers. The groups of boys all wearing the same tops and trousers, with the same hair cut. The groups of girls with the same hairstyle and make-up, all of them in the same lengthen of skirt.
I know, as human beings, we want to belong, and often we do this through the way we look and act. When I was coming out and trying to build my own identity that was important to me, I wanted to belong with the gay men I saw in the clubs. It took me a few years to realise I didn’t belong with that group, the gay men out on the gay scene. The first thing I did when I realised this was to grow my hair out long. Strangely that did make me more attractive to other men, but gay men I meet away from the gay scene.
For me being my own person is the most important, and with that I’ve found acceptance in the most interesting and diverse groups.
So what made me have all these strange thoughts on a quiet Sunday afternoon trip out?
At the moment I’m finishing off a short story about identity. A man finds out that he’s actually a human clone, and that knowledge shatters his identity. He thought of himself as an individual, when in truth he is merely one of many copies of another.
With me, life doesn’t just influence my writing but my writing can bleed into my life... what fun...
Drew.

P.S. You can see more of Martin’s pictures from Three Mills Island at: http://martins-day.blogspot.com/2010/08/three-mills-island.html
Posted by Drew Payne at 02:53