A knock at the Door 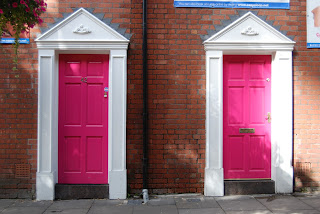 I consider myself a sophisticated and metropolitan person, not the type who’s taken in by an easy con-artist. I don’t reply to emails pretending to be a bank and wanting my bank details. But the other week I was nearly caught by a simple con-artist.
In the early afternoon, there was a loud knock on our front door. When I answered it I found two men, dressed as workmen, on the doorstep. They claimed to be from Dyno-Rod and wanted accessed into our garden. They claimed they were working on the drains on the house behind our and they needed access to our drains. When I said there was no manhole in our garden one of them became aggressive, snapping at me that I was lying (!!). Eventually, they seemed to believe me and left.
Five minutes later I received a phone call from a man claiming to be a director of Dyno-Rod. He gave me a long and, with hindsight, well prepared explanation about our drains. He said they had put a camera down our drains and found they were damaged. They needed to put a special machine down our drains to seal any cracks (even though I’d never contacted them or noticed anything wrong with our drains). Then came the sting, they wanted a £5,000 deposit for their machine to repair our drains, a repair I never asked for.
When I said didn’t have that amount of money he became very aggressive, almost shouting at me that I was lying (this should have set off warning bells in my mind but I was too shocked at his demand for the £5,000 to think straight). He kept demanding the money and pushing at me, wanting to know if I had a bank account. Eventually I got him off the line by saying I needed to speak to a friend to borrower the money (not true but he wasn’t being truthful).
Straight away I ran Dyno-Rod’s head office (getting their number off the internet) to find out if that phone call was illegitimate, which of course it wasn’t. They don’t charge deposits for machinery, they only charge the person who calls them in, not a third party, and they didn’t have anyone working in this area. It was a scam.
The woman at Trading Standards, I rang for further advise, said very much the same. She was very concerned that I might have handed over money to those men, fortunately I hadn’t.
When the scammer did ring me back, after the £5,000, I challenged him with everything I’d found out and said I wasn’t giving him a penny. He replied that he’d get the “company accountant” onto me. That was the last I heard from them.
Later, I reported it to the police and they said it was an attempt to con money out of me and they logged it as a crime. Also later, the real director of Dyno-Rod contacted me. He was very angry at what had happened, because those men were damaging the good reputation of his company.
It was after it had all happened that it occurred to me how nearly I was taken in. It was only when the man demanded a £5,000 deposit from me that I got a kick of reality, and that was because I couldn’t afford that type of money.
I didn’t think I would ever be taken in by scams but this caught me so unaware. They called out of the blue and claimed there was something wrong with our drains, I was too shocked to think at first.
It’s a sobering thought.
Drew.
Posted by Drew Payne at 15:57