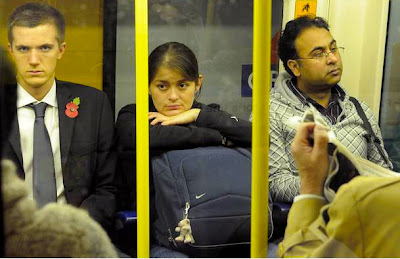 It’s that great device used in so much fiction, the overheard conversation. It usually takes place in a public place, often on a train, were one character listens in to the conversation of two others, this conversation gives away details or facts that set the plot in motion.
The other literary story is that a writer overhears a conversation, usually in a public place, and that sets their mind off on a tangent to create an idea for a piece of writing. In the Agatha Christie novel Third Girl, Mrs Ariadne Oliver (A crime writer, who many believe was based on Christie herself) tells a story of overhearing another woman on the bus. This sets her imagination off and she creates a whole character and plot around this woman.
Today, Martin and I went shopping in the West End of London. On the tube there and back, and as we wondered around the shops, I overheard many conversations but none of them had fascinating tips of information or set my mind off on any creative tangents. There were parents with their pretentious children, lost tourists, complaining shoppers, elderly women more interested in the company of their friends than anything else, teenage boys showing off to their mates like strutting peacocks and a young woman who could have moved to Greece if she didn’t have so much “stuff”.
Today was not one of those days when my imagination runs wild, not a typical day then, but I have enough writing ideas and projects on the go already so I am not too worried.
Drew.
Posted by Drew Payne at 14:42