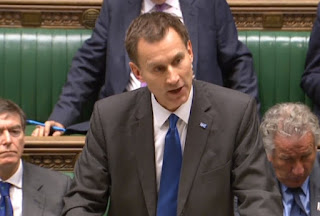 “Oh Jeremy, stop lying!”, is the edited version of what I shouted at the television, on Monday evening, as yet again they reported another ridiculous statement from Jeremy Hunt (1).

This time Hunt was hinting that the government could redefine the 4 hour waiting time target in Accident and Emergency. He said that the 4 hour target should only apply to patients with “urgent needs” (1). Again, Hunt was faced with a crisis in the NHS and he responded with weasel words. The NHS is in crisis, it needs strong leadership, it needs help and understanding, it needs resources and funding, all it gets from this Health Minister in an attempt to wriggle out of the crisis. Again Jeremy Hunt fails in his job.

This January hospitals are facing huge demands on their services and Accident and Emergency Departments are breaking under the strains (2). A third of NHS trusts in England had issued alerts that they needed urgent action to cope with demand (3). More than one in ten patients faced long delays, well over four hours, waiting for a hospital bed after being admitted via A&E (4). NHS hospitals are full, no spare beds, patient beds are being placed in day rooms and staff rooms and even treatment rooms, places that were never designed to house patient beds. New patients cannot be admitted until other patients are discharged, the system is blocked.

Two patients died while waiting in a corridor for treatment, at the Worcestershire Royal Hospital (5). Their deaths are currently being investigated by I can’t help but ask, would they have died if they had been sitting on a hospital trolley in an A&E bay?

This whole terrible situation has been called a “humanitarian crisis” by the British Red Cross (6). Mike Adamson, the charity's chief executive, said that the British Red Cross is currently providing support in twenty different A&E Departments (6). Their assessment of the current situation is damning, but what is more damning is that a charity is helping to prop up our A&E departments. What has gone wrong?

Our press is full of claims of mismanagement and over spending, but the truth is this crisis should be firmly laid at the feet on this government.

Jeremy Hunt also said of people attending A&E that “30% of whom do not need to be there” (1). Figures from The Kings Fund show this isn’t true (9). from the Patients’ Survey in 2015, they found that of the 11% of patients who couldn’t get GP appointments when they wanted one, 4% of these people went to A&E. That is 4% of 11%. Not the 30% of all A&E attendees that Hunt was claiming. But the number of patients using A&E because their GP is unavailable could be increasing. Dr Helen Stokes-Lampard, chair of the Royal College of GPs Council, has warned that many patients have to wait four weeks or more for a routine GP appointment, because of the pressures on and short falls in GP Practices (10). In that time a non-urgent problem could easily become an urgent one. 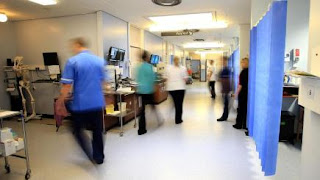 breaking point, it is now very difficult to get new someone home care, and finding a bed in a Care Home is nearly impossible, because there isn’t the funding for it any more. This creates a bottleneck in healthcare, elderly patients cannot be safely discharged because there isn’t the home care available and neither are the Care Home places. But this lack of social care creates another pressure on the NHS, there are elderly people at home who are not getting the social care they need. Because of this lack of social care their health deteriorates and they have to be admitted to hospital. My own local council has seen their social care budget “outrageously” cut (8)

NHS budgets are also suffering too. 64% of trust finance directors and 88% of acute trusts are forecasting a deficit at the end of the financial year (11). This is not due to any mismanagement on behalf of these NHS organisations, this is due to the financial cuts, in real terms, in NHS budgets. Demand on NHS services has increased far higher than the current inflation rate, which is 1.2% (12), yet the NHS’s funding is only increasing 0.9%  a year (13), and this doesn’t take into account the £22 billion of “efficiency” savings the Department of Health is demanding from the NHS by 2021 (14). (The second half of my blog posting Four Corners of the Same Room goes into this in much more detail)

So what has our Government done about the crisis overtaking the NHS? Simply put, not much.

In last year’s Autumn Statement Philip Hammond, the Chancellor, announced no extra funding for the NHS or social care (15). it was not as if he couldn’t see this year’s winter’s crisis, the target for treating 95% of patients attending A&E within 4 hours was missed throughout all of last winter (16), and last winter we knew that the cuts in social care was preventing hospital discharges. Even Andrew Lansley, the Conservative architect of the 2011 reforms of the NHS, warned that the NHS and social care needed more funding (17).

Jeremy Hunt told parliament that the 4 hour A&E target might be revised and claimed 30% of people visiting A&E were not appropriate (1) (In 2014, again in parliament, Hunt admitted he took his children to A&E at a weekend because he couldn’t be bothered to wait for an Out of Hours GP appointment (18)). That’s as far as his leadership has gone. 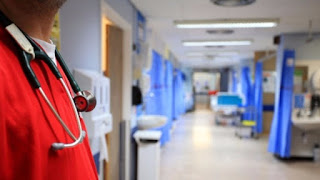 Theresa May criticised the British Red Cross for calling this a “humanitarian crisis” (19). Neither her of Hunt have offered any political leadership or responded practically to this crisis. We cannot expect any more from Hunt, he has show poor or non-existent leadership in the face of previous NHS problems. Theresa May showed how low a priority the NHS was to her when she became Prime Minister and left Jeremy Hunt as Health Minister. Her priority is Brexit and she seems to have so little interest in the NHS.

Again we are faced by a winter crisis in the NHS, this is not a new crisis, it has been happening for several years now, and still we are here again. Our government could have prevented it, instead they react like they were caught off guard by this very predictable crisis. What are these people being paid for?