Their Lips are Moving But I Don’t Believe a Word That They Say... 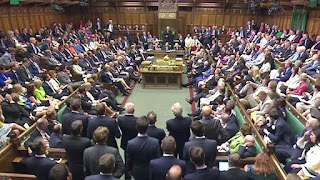 My mother used to say that you could always tell when a politician was lying because their lips would be moving. Even as a child that did not always ring true with me, there are good MPs, people who care and who want to change things for the better… Now I am not so sure, well certainly not about the MPs in our governing party.

This government has capped public sector pay rises at 1% since 2010, it began with a two year pay freeze (1). This was part of their policy to reduce our country’s deficit, what has become known as austerity, not an unfair name. But this policy, the pay cap, has hit NHS staff hard. By 2014, only four years into this policy, NHS staff’s pay had risen only half as much as the rate of inflation, 2010 to 2014 inflation rose by 12% where NHS staff’s pay only rose by 6% (2). Since 2010 nurses’ pay has fallen, in real terms, by 14% (3). This pay cap is not only unpopular, it has also had a severe effect on the nursing workforce. 10% of NHS nursing posts are vacant (4), and at the beginning of July it was announced that more nurses were leaving the profession than were joining it (5). The Nursing and Midwifery Council (NMC), the registration body for nursing, revealed that in the year to March the number of registered nurses fell by 1,783. The more nurses we lose the more patient care is affected, nurses are the glue of healthcare.

Now nurses aren’t just leaving nursing because of our stagnating pay, but it is a huge factor in the poor working conditions facing us.

After this year’s General Election (The election no one wanted) many leading Conservative politicians stepped forward and said the pay cap was unfair. Boris Johnson, the Foreign Secretary, was reported as supporting the idea of public-sector workers getting a better pay deal (6). Michael Gove said independent pay review bodies should make the decision on pay (7). Sir Oliver Letwin supported a limited rise in taxes to support scrapping the cap (8). Tory MP and former nurse Maria Caulfield said NHS staff "will vote with their feet" unless pay is tackled (8). Even Jeremy Hunt hinted at scrapping nurses’ pay cap (9), he said “I have a great deal of sympathy for the case that nurses amongst others have made on the issue of pay.”

With all this support in the Conservative party it should have been easy to scrap the pay cap, but it seems that politicians say one thing in front of the media and do another thing in a parliamentary vote. The Labour Party introduced an amendment to the Government’s Queen Speech (The Bill were the Government lays out their plans for the next parliament) to scrap the public sector pay cap (10). The Conservatives, in a deal with the DUP, defeated this amendment by 323 votes to 309 (11), a very slim majority. But Boris Johnson, Michael Gove and Oliver Letwin all voted against the amendment. Three Conservatives MPs who were all former nurses voted against it (12), Anne Milton, Nadine Dorries and Maria Cauldfield, who had previously spoken out against the cap (8). When they won the vote Conservative MPs cheered (13), the shear tastelessness of which is breath-taking. They had just voted to cut our wages in real terms and then they cheered themselves.

The Government has now stated that the pay cap is here to stay (14), condemning millions of public sector employees to seeing their pay falling in real terms. In the same period MPs have not seen their own pay rises capped, in 2015 they received an inflation busting 10% pay rise (15). Inflation continues to rise but our wages don’t. Prices continue to rise, rent and mortgages continue to rise, food, fuel and the internet all continue to rise in price and yet our wages don’t. Soon no one is going to want to work in the public sector.

At the height of her campaigning during the General Election, Theresa May appeared on BBC Question Time. A woman in the audience, a nurse, challenged her over the pay cap. To justify it, May replied, “There isn’t a magic money tree that we can shake that suddenly provide for everything that people want.” (16) But this was a lie.

Faced with a hung parliament, Theresa May formed a deal with the DUP for their ten votes to support her Government in their key votes. The price of this deal is £1.5 billion in extra funding for Northern Ireland (17). This £1.5 billion would fund a pay rise of 3% for all NHS staff. A pay rise of 1% for NHS staff would cost £500 million (18), therefore a 3% rise would cost £1.5 billion. And this deal with the DUP isn’t to support the Government in all votes, just key votes. Nice work if you can get it.

As for Theresa May’s claim that there’s no “magic money tree” is a lie. She can quickly find £1.5 billion to prop up her failing Government, a hung parliament she caused, but she can’t find money to relieve the hardship of so many public sector workers. And she doesn’t need a “magic money tree”, she can simply raise taxes, she has the power to do that. 48% of the British population would support rises taxes to ease austerity, this year’s British Social Attitudes Survey found (19).

After treatment like this how can I trust anything this Government does? Whose interests do they have at heart, not those of the vast majority of the people who make up this country? I am sickened, my Government is morally bankrupt.