The Healthcare Professional Will See You in Four Hours Plus 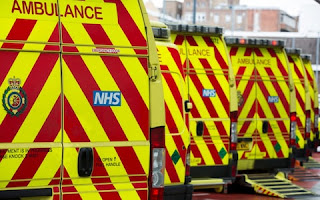 Two years ago I had pneumonia. After three weeks of antibiotics and resting at home my symptoms had not improved. I staggered to see my GP, that Friday morning, and he advised me that I needed to be treated in hospital, there was no more he could do for me and I wasn’t getting any better. Reluctantly I agreed with him and my husband took me to your local A&E. We arrived at 12.00 noon, at 1 o’clock in the morning I received my first dose of antibiotics.

At the time I was so angry and demoralised to be treated like this, as if they didn’t really believe I was that ill, but later I came to realise what had happened, after talking to other people and checking some facts. The whole hospital, not just the A&E Department, were short staffed and having to cope with a large increase in demand. Is it any wonder that the system cracked?

On Monday 28th January, the Government took a step that will make my experience happen more often and to more patients, they announced that they will scrap the four-hour waiting target for A&E treatment (1). The Chief Executive of NHS England, Simon Stevens, announced it the Health and Social Care Committee meeting, on the 28th (2). Matt Hancock, Secretary of State for Health and Social Care, was also giving evidence to the committee at the same time. Simon Stevens said the four-hour target would be significantly altered, political language for scrapped (1).

This has certainly come as a surprise to everyone working in the NHS because no one had been consulting on this, neither the Royal College of Nursing (RCN) or the Royal College of Emergency Medicine (RCEM) were consulted about this (3), the Government just dropped it on us. This isn’t a new idea from this Government, in January 2018 Jeremy Hunted had hinted at this, in the face of the winter pressures on the NHS (4). It seems that the Government is using Brexit, and all the chaos we are facing because of it, to push through something they have been wanting to do for a while.

The four-hour A&E target has been a thorn in the side of this Government for so long. The target is that 95% of patients are treated within four hours in A&E, but in December only 86.4% of patients were treated within this target, and since July 2015 the target has not been met once (3). This has been a constant indicator of how poorly this Government is resourcing and managing the NHS.

The four-hour target was not reached by plucking a number out of the air, but is evidence based (5). It was introduced in 2004, following extensive consultation by the then Labour Government, as a response to overcrowded A&E Departments were patients were faced with long waits for treatment (5). Yet now, when we are again being faced with overcrowded A&E Departments and patients facing long waits, this Government plans to scrap the four-hour A&E target. What is the logic in this?

Targets, when evidence based, have proved very useful in measuring healthcare outcomes and help improve the quality of care. The RCEM, in a report supporting the four-hour target, have found extensive worldwide evidence that time-based targets help improve performance and were associated with reductions in morality (5). This target has also proved useful in highlighting places that are under pressure and strain, but now what it is doing is repeatedly showing how much strain the whole NHS is under, month after month, and embarrassing the Government, month after month.

A&E Departments are under stress for a lot of reasons, not just an increase in demand, but since 2011 there has been 8.8% raise in people attending A&E, this is 23.4million more A&E attendances, or 5,100 more patients a day (6). These increases in demand have not been matched with an increase in resources, which have stagnated since 2010, but there are also other factors putting huge strain on A&E Departments, such as:

- Staff shortages. 10.9% of nursing posts (7) and 7% of doctors’ posts (8) in the NHS are currently empty. These figures are for across the NHS, but this does mean there are far less nurses and doctors available to work A&E Departments. Shortage of staff has been directly linked to poor care. 45% of NHS staff, involved in patient care, have reported that they are too short staffed to deliver safe, dignified and compassionate care (9), and A&E Departments are not immune to this.

- Loss of hospital beds. In the last 30 years the NHS has lost half of its in-patient beds, right across the broad, including medical, surgical, maternity and mental health beds (10). Since 2016/2017, hospital bed occupancy has been running above 90% and regularly exceeds 95% during the winter months (10), which is far higher than the recommended safe limit of 85% (11). The less hospital beds available, the less availability there is to admit new patients, the harder it is to admit patients from A&E, therefore the longer patients have to wait in A&E to be admitted and the four hour target is routinely broken.

- Underfunding of social care. Since 2010 social care budgets have been cut by £7bn and between 2018-2019 they will be cut by a further £700 million, 5% of the whole budget (12). This directly affects patient’s ability to be discharged, because there is less money for home carers, less money for care home funding, less money to adapt patients’ homes and therefore less support for patients living in the community. When there isn’t the social care support then those patients cannot be discharged, becoming delayed transfer of care (DToC) patients, and DToC’s caused by social care problems have increased 130% since 2014 (13). And if hospital beds are being occupied by DToC patients, how can new patients be admitted from A&E?

There are a lot of factors that have caused the increase in A&E waiting times and there isn’t one, easy fix to it. Like so much else in healthcare, there are a lot of interconnected factors.

Different NHS Trusts and Social Care Providers around the country are introducing strategies and services to try and reduce A&E attendance. Doncaster has set up a multidisciplinary rapid response team to treat patients in their own homes (17); in Dorset an advanced nurse practitioner acts as a “gatekeeper” to A&E, redirect non-urgent A&E patients to other services where they can be seen (18); at the Chesterfield Royal Hospital nurses have been placed in charge of assessing patients at the children and young people’s assessment unit, therefore streamlining the service and reducing unnecessary admissions (19). But these are only local changes, none of them are national strategies, and it could be even argued that they are only tinkering around the edges. None of them are trying to tackle the reasons behind the increase in A&E demand.

What we need are national strategies to tackle this problem. We need more community services that people can access near to their home when they have an urgent care need (An infection, a wound, a sprain, etc…), which are not just open Monday to Friday, nine-to-five. We need services that enable people to stay in their homes when they are ill or have a long-term health condition, not just social care but much more healthcare being delivered in or near to patients’ homes. I am a Community Nurse, and many of my housebound patients still struggle to get to and from hospital outpatient appointments because there is no alternative. We need to move to a more community-based healthcare system. When I was a student nurse (nearly thirty years ago now) there was a lot of talk about moving us to a community-based healthcare system, and since then that is all there has been, talk. There are some local-based initiatives, but that has been no national policy or political will to achieve this.

In their new NHS Long Term Plan, the Government has promised, by 2023, an extra £20bn in NHS funding, but only £6.9bn will be spent in the community (17). How the are we expected to develop all these new services to reduce hospital admissions with only 34% of the funding? I would say this is a joke but it isn’t funny.

A&E Departments are not coping with the rise demand for their services, which is caused by a lot of factors, and yet this Government’s sole response has been the scrap the A&E treatment target, and therefore remove the one thing that has highlighted the problems in A&E Departments. Do they think that by hiding the problem it will somehow go away? Because this seems all they have done about it.

Managing Brexit is not the only thing this Government seems incapable of doing.