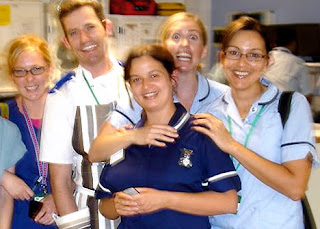 Today, the Royal College of Nursing (RCN) voted almost unanimously to pass a vote of No Confidence in Andrew Lansley’s (The Minister for Health) handling of the NHS. 98% of the delegates, at the RCN’s conference, voted for the motion.
(I also jumped for joy when I heard this. The RCN is my union, nursing is my profession and the NHS is something I believe passionately in – the alternative is too horrible to consider.)
Lansley is forcing onto the NHS reforms that it doesn’t need and will destroy so much that is good about the NHS. Lansley seems to want to turn the NHS back into some fantasy of the 1950’s were “Doctor Knows Best”, yet ignoring its real needs, to move patient care out of hospitals and into the community. Do we need to go hospital for every medical treatment? Can’t a lot of it be done away from hospital? A lot of it could be, to the benefit of patients and make the NHS more “cost-effective” – healthcare is certainly not cheap.
The RCN is rightly to be concerned about Lansley’s behaviour, he’s been less than honest about it. He’s the first Minister of Health, in eight years, not to address the RCN Conference, instead he’s meeting with a group of 50 nurses to “listen”, he says. In reality, this is an appalling act of disrespect. He refuses to face the RCN to explain his “reforms” and if he wants to “listen” why can’t he listen to the RCN Conference, instead of meeting just a selected few. What’s he afraid of?
Lansley has been less than honest about these reforms:
• They were never mentioned in the Tory manifesto, at the last election, therefore there was no debate on them during the election.
• There seemed very little consultation on these reforms, certainly no nurses or other allied health professionals were consulted. Only now has the Government announced a review panel to look at this health bill, only three of the panel are nurses.
• He wants to introduce more “competition” into who provides NHS services, hospitals competing against community providers and the private section. We’ve had this before, Thatcher’s Internal Market, and it was a disaster and wasted billions of pounds.
• The worst conceit is that Lansley claims the reforms are based on his own experience of the NHS, but the reality is very uncomfortable.
In 1992, nineteen years ago, Lansley suffered a stroke. He received terrible treatment, he was dismissed as only has having an ear infection and it was only a CT Scan, at a private hospital, that confirmed he’d had a stroke. It was this experience, and his recovery from that stroke, that he says has caused his “desire” to “reform” the NHS. But there are discrepancies in his story that he isn’t being honest about.
When he suffered that stroke the Tories were in Government and in charge of the NHS. The NHS back then was an organisation that was very underfund, under-resourced and staff morale was very low – I worked in the NHS back then.
The NHS has had a lot of change since then, for good and bad, but it is not the same organisation as when Lansley had his stroke, yet he’s claiming the NHS is disparate for reform. How much does he know about the NHS today, from what he’s said I feel it is very little. 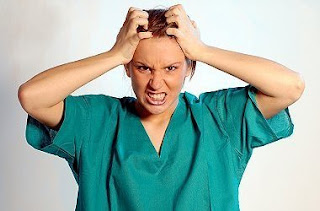 Lansley claims GPs know patient needs best so they should be the ones almost totally in charge of the NHS, but GPs, like all Healthcare Professionals, only know the patients’ needs they see. They’re not involved in sexual health, HIV & AIDS care/prevention, maternity care, elderly care, cancer care, they don’t perform operations, are not involved in Emergency Care, and so on and so on. So can they decide what is best in these areas? I’ve never worked in paediatric care; I couldn’t decide what is needed for a Child Health service.
(My partner, Martin, has only seen his GP once, the four years we have been living here. How can his GP know what Martin’s health needs are?)
Lastly, something else I don’t think Lansley will be listening to:
In 2007 Atos Healthcare (A private healthcare provider) won a ten year contract to run an East London GP Practice. Yesterday it was announced that Atos has pulled out of that contract because it couldn’t provide the services that GP Practice needs. This should be a warning to Lansley, if he opens up more of the NHS to private providers we are going to have more examples like this.
Andrew Lansley says he’s listening, well listen to this.
STOP THESE “REFORMS” NOW, before you totally destroy the NHS.
Drew.
Posted by Drew Payne at 09:22