Why I am Supporting the Doctor's Strike, And It wasn't a Hard Decision 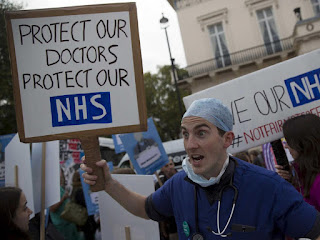 Tuesday 12th January, tomorrow, doctors will strike and I’ll be supporting them. This isn’t us v them, this is a direct attack on my colleges, the doctors I work with.

Jeremy Hunt wants doctors to accept new contacts but these contacts are far from fair. They will radically re-write their conditions of work.

This is why I am supporting the doctors:

1 Junior Doctors are any doctor who is not a Consultant or GP. This isn't just junior House Officers but the vast majority of doctors in the NHS.

3 This new contract will cut doctors' pay in real terms. They are being offered an 11% pay rise but their unsocial hours payments will be cut by 25%. The new contact will say that working until 10 o'clock at night, night shifts will not begin until 1 o’clock in the morning and until 7 o'clock at night on Saturday will become part of the "normal" working work. Unsocial hours payments are rewards for working outside of normal working hours, a reward for the dedication for doing so, a reward for the loss of social and family time doing so. This new contract says that dedication is worth nothing.

4 The penalties on Trusts for making doctors work more than their contacted hours will be virtually removed. If a Trusts does make doctors work dangerously long hours they will still be fined but they will pay themselves the fines. This is no fine or penalty at all, and says to Trust managements that the government is not interested if they over work their doctors. Of the increase to contact’s basic hours and the near abolishment of unsocial hours makes it far easier to force doctors to work dangerously long hours without encoring even meaningless penalties.

This is an attempt by Jeremy Hunt to “break” the power/influence of the doctors, but in reality all it will do is give us even more stressed and over-worked doctors. How will that benefit patient care? It won’t, but Jeremy Hunt has repeatedly shown that patient care is not a high priority for him.

If we turn our backs on the doctors who will Jeremy Hunt come after next? As a nurse my pay has already been capped at 1% for the foreseeable future (and with inflation at over 2% this means a cut in real terms), student nurses will lose their bursaries next year and will be faced will the burden of student loans just to train as a nurse, and nurse's unsocial hours payments are already under threat. If we tolerate this who will Jeremy Hunt come after next? Everyone in the NHS has to be united.

A big deal, in the media, is being made about this strike affecting patient care, but it will not damage patient care the way Jeremy Hunt's repeatedly attacks on the NHS and the government's cuts to NHS resources have already done.