PrEP or When Healthcare Isn’t Fair 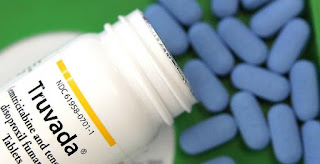 We have a drug that is 86% effective at preventing a certain health condition (1), at its best the seasonal flu vaccination is only 50% effective (2), yet the NHS will not provide it on prescription. The argument is that it’s too expensive (3). If this drug prevented heart diseases or diabetes we would jump on it, but this drug is PrEP (pre-exposure prophylaxis) and prevents HIV, which that still carries a heavy stigma in this country.

At the beginning of August The National Aids Trust won a landmark victory (4). The High Court ruled that England NHS can fund PrEP, not that they should fund it only that they can. It took a court case to decide this, to say whose responsibility it is to fund PrEP. It took the shame of a charity having to take NHS England to court to obtain this ruling, like cowboy builders being taken to court to be made to do the actual job they were meant to do. But NHS England has already said it will appeal the decision, saying that PrEP is too expensive to fund. This still leaves people needing it unable to get it on an NHS prescription.

How expensive is PrEP? A Tory Lord has already claimed that it is too expensive for the NHS to fund (15). 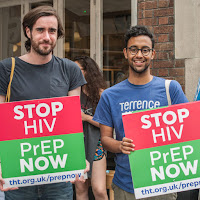 prescription for it because it is only available via a prescription), without the private doctor’s fee it can cost as little as £45 per month (16). Evolocumab and Alirocumab, anti-cholesterol medication (also preventative medications) cost the same as PrEP (6). The lifetime cost for treating one person who is HIV+ is about £380,000 (7) and there are 103,700 living with HIV in this country (8), with 6,000 new people diagnosed each year (9). Even if no new people were diagnosed with HIV and the cost of antiretroviral treatment didn’t increase, that is still a cost of £39,406,000,0000. How can PrEP be more expensive than treatment of HIV? Also HIV can severally impact on a person’s quality of life (14)

What this does highlight is the poor state of funding of the NHS.  Since 2010 the NHS has seen severe cuts to its funding (10). In 2009, under Gordon Brown, NHS funding had increased to 8.8% of GDP, in line with most other EU countries at the time. Since then, since the Conservatives came into Government, NHS funding has rapidly decreased, it has now fell far behind the other EU countries. We currently spend 7.3 of GDP on health (compared to 10.1% in the other EU countries) and there is no sign of any real increase in funding from Theresa May’s government.

PrEP is an easy target for not funding because HIV still carries such a stigma in our society. 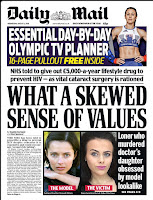 When the High Court ruling was announced the Daily Mail ran a headline calling PrEP a “lifestyle drug” (11). Botox and hair growth supplements are lifestyle drugs. PrEP is a proven and effective preventative drug, yet the stigma of HIV runs too deep to allow us to have a reason debate about PrEP. A Nursing Standard Twitter poll found that 54%, of people who responded, thought PrEP should be self-funded, 42% thought it should be funded by the NHS and 4% thought local councils should fund it (12). This was a poll of nurses, people who should know the benefit of preventative treatment, but the stigma of HIV has a long shadow. It seems as if we can never escape the prejudice, homophobia and scaremongering of the 1980s when HIV is ever mentioned (13). 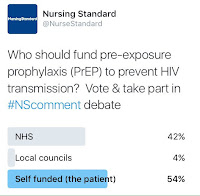 This all leaves the people who need PrEP the most out on a limb. Some people are going to different Sex Health Clinics or A&E Departments, saying they have just had unprotected sex with someone who is HIV+ and asking for PrEP, called “clinic hopping” (17). Clinicians are, at present, only allowed to prescribe PrEP as treatment for exposure to HIV, it is a single months course only. But is no way to take PrEP as an effective preventative. There is no one monitoring the person’s health, regular blood tests, monitoring any side-effects, helping with compliance. And what if they can’t find another clinic for their next month’s supply? It can be bought privately, but it needs a doctor’s prescription for each month’s supply, it can’t be bought over-the-counter like paracetamol. A private doctor’s fee can be £55 for 15 minutes, up to £145 for an hour (18), and this doesn’t include blood tests and follow-up monitoring. Also this doesn’t guarantee that the doctor is familiar with PrEP and knows how to prescribe it safely? A full private medical service for regular PrEP (including monitoring, screening, support, regular and appropriate blood tests) can cost £400 a month (5). This is well out of the reach of a lot of people and this isn’t available across the country.

We need more preventative treatments, with the cost and demand for healthcare spiraling ever upwards we cannot afford to simply just treat the symptoms of long term health conditions. We need to prevent people developing these conditions, and calling them “lifestyle factors” and blaming the person who developing the condition is no answer. We need to move to a preventative medical model, not just a treatment medical model. But all the prejudice and stigma that quickly rose to the surface with PrEP shows that our society hears them over medical evidence.

The NHS cannot afford to fund PrEP yet this isn’t the headlines that PrEP generates.