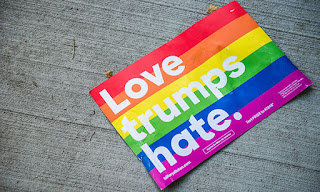 This year marks the 50th anniversary of the Sexual Offences Act 1967 (a). This was the act of parliament that partly decriminalised male homosexuality (the law never acknowledged lesbian sex), it opened a crack in the wall and was the first step towards change in our society.

I came out when I was eighteen, more than thirty years ago, and overnight I lost almost all of my friends, I was ostracised just for being gay. It was a shocking experience that has left a lasting impact on me.

Today I am married to my husband Martin and work as a Community Nurse in North London. Everyone at work knows my husband and no one has a problem with him, I have almost forgotten the last time I experienced homophobia at work, certainly not in this job.

So much has changed since I was a teenager, changes I would never have believed back then. We have marriage equality, we have protections against discrimination at work and when we use businesses or services, the Equality Act (b). Lesbian and gay characters can be found on so many different television programs. We have won so many protections and rights under the law in this century that it makes our world almost unrecognisable from the one I first came out into.

So we can just relax and sit back, all the work has been done. Unfortunately no. Homophobia is still alive, it is just not as blatant as it used to be, and the NHS is still not an open and welcoming place to everyone.

In 2016 a BMA study found that over 70 percent of LGBT NHS doctors have experienced homophobia at work, and three quarters had not reported it because they feared it would not be taken seriously or they feared reprisals (1). “I don’t think the NHS is an LGBT-friendly environment”, said Dominic, one of the doctors contributing to the study. This type of homophobia isn’t restricted to doctors only.

Last year also saw the unsightly sceptical of NHS England going to court so they would not have to fund PrEP, the HIV prevention medication (2). If used correctly PrEP is 86% effective (3), far higher than most vaccines. If PrEP prevented heart disease or diabetes we would be welcoming it and there would be no question the NHS would provide it. But PrEP prevents HIV and NHS England felt it could justify not funding it, tapping into the homophobia around HIV.  A Nursing Standard Twitter poll at the time found that 54% thought PrEP should be self-funded and not provided by the NHS (4), and it was mostly nurses taking part in that poll. 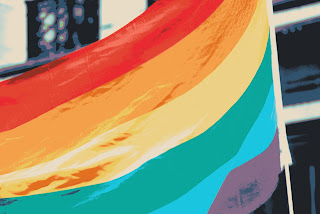 There was a shocking spike in hate crimes following the referendum result last summer (6). Less publicised was the 147% rise in homophobic crimes in this period (7). Homophobia hasn’t gone away and the Brexit climate seems to be giving it oxygen again.

Brexit also raises another challenge for LGBT people. When Britain leaves the EU all the EU laws that are also part of our laws will be reviewed and we might lose many of them. EU Article 10 offers protect from discrimination, including on grounds of sexuality (8). Employment Framework Directive 2000/78 (9) protects people against discrimination at work on grounds of sexuality.

Many in the Conservative party have openly called for the repeal of the Human Rights Act and the Equality Act (9a 9b 9c), Theresa May has previously spoken of her dislike of the Human Rights Act (10). What laws, what protections will we lose as Britain separates from the EU? The government has given us no re-assurances, they barely seem to know what they want from Brexit itself.

In America, Donald Trump’s Government has taken a shocking turn. Almost all of his cabinet have previously gone on the record with their anti LGBT views (11). Within only a few hours of Trump becoming 54th president the LGBT section of the White House website disappeared (12a). Trump’s plans to slash federal funding for AIDS have been leaked (12b), and in only the last few days Trump has signed a “religious liberty” executive order (12c). Many LGBT American’s fear this will be only the beginning of the weakening of LGBTI rights in the United States, allowing discrimination against LGBT people in the name of “religious freedom”. 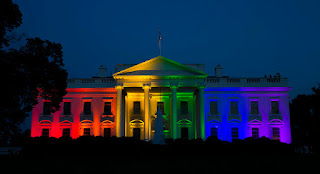 It is no longer true that what American does today we in Britain do tomorrow, but many people here still look to America. People, who have been campaigning for the repeal of marriage equality and LGBT protections, will be looking very keenly at Trump’s administration, especially as they roll back LGBT equality.

Peter Tatchell once said that LGBT people are the litmus test of how a society respects human rights (13). If a society doesn’t value diversity how will it value anyone? But why should nurses worry about human rights? Because if we don’t how can we nurse anyone with dignity.

(This was originally published as part of the Nursing Standard magazine’s LGBT History Month special, it was also published on the RCNi website here. Unfortunately you have to be registered with RCNi to view it. Therefore I have re-published it here, on my blog, after updating it.)