The Path Away from Liverpool 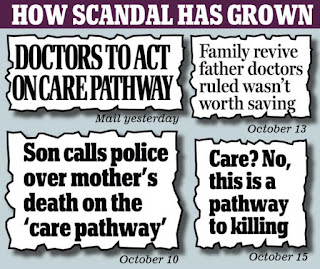 In 2001 my mother died from cancer. The end of her life was a series of Chinese Whispers, what she wanted in her last days pieced together from what she’d said to different people at different times. It was stressful and messy, making a different time even more so, and I seemed to be the one having to pull all these different pieces of information together.

Following sensationalist tabloid headlines last year (1), many of which were misleading or deeply inaccurate (2), the Government announced a review into the LCP (3). This review published their report on the 15th July 2013 and the Government’s main recommendation is the “phasing out” of the LCP (4).

The review didn’t find anything wrong with the LCP, certainly not the claims made in the tabloids (5). They did find examples of poor practice with it, the LCP being implemented incorrectly, being started in the middle of the night, being started without discussing it with patients or their families, of it being used simply as a tick-list with palliative patients. They found staff had not been suitably trained in the use of the LCP and the lack of availability of expert advice out of hours. The review certainly didn’t find any adverse affects of using the LCP, it certainly didn’t hasten the deaths of any patients (5). A 2009 audit, by the Royal College of Physicians, found the use of the LCP provided high quality care (6).

We still have a poor record of training staff, in British Healthcare. There’s more to using the LCP then just a quick read through it before implementing it. End of life care is complicated and multi-disciplined, it requires skills and experience, it’s more than filling out a check list. We need to invest in our staff and train them, enable them to deliver the high standards of care end of life patients need.

People don’t always die Monday to Friday, between 9 and 5, and yet that’s when most Palliative Care clinicians and experts are available. This isn’t just a problem faced only by palliative care, it is found in many specialist services.

Unfortunately, what really sounded the end for the LCP was poor leadership. When the first stories about the LCP appeared in the press we needed clear and strong leadership from the Department of Health and the Minister of Health, instead Jeremy Hunt bowed down to media pressure at the first turn.

The LCP, through no fault of its own, is to go, the review found it was too damaged from all the bad publicity it has received (5). End of life patients still require the highest standards of care. We now need to ensure they receive it. Whatever replaces the LCP will still require staff training, resources and leadership to back it up. As nurses, we need to put on the pressure to ensure this happens.

PS. This blog was originally written for and published on the Our World website