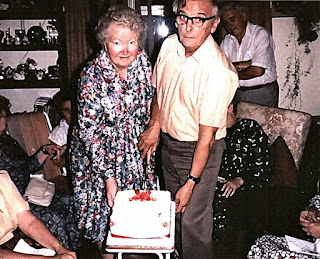 My father married the girl next door. My parents met because they lived next door to each other, in post-war Barrow-in-Furness. But saying it like that makes their story sound so simplistic.

My parents did not a make big deal of how they met. It certainly wasn’t a family story, brought out at every chance and worn as a badge of pride. I only found out how they met when I was fifteen. My parents had taken me back to Barrow-in-Furness, a car drive up from Liverpool with our pet dog. That trip we had not visited either of my father’s brothers, who still lived there, he was not close to either of them. He had been close to his brother John but John had died several years before from cancer. With hindsight, losing his brother deeply affected my father, John was the first of his brothers to die and it made my father face his own mortality. My father was always stoic with his emotions, not talking about his feelings and just keeping things to himself. I wasn’t aware, at the time, of how much John’s death affected him, I was not a preceptive teenager, but I have had many years to look back on events.

I don’t remember why we visited Barrow-in-Furness that bright spring day, but my father decided to drive around the city, showing me places from his childhood and youth there. As we drove around, our dog bounced about on the car’s backseat with me, she hadn’t had a long enough walk and was full of energy.

We drove to the street where my parents had lived as neighbours.

It was a narrow street of terraced houses, the briefest strip of pavement in front of the two rows of houses and the road itself still made from cobblestones, causing the car to rhythmically shudder as it was driven over them. My father stopped the car in front of two houses. They were a matching pair of terraced houses. He told me that they were the two houses where he and my mother had lived, with their parents, before they married. The house where my father had lived now had a cream-coloured rendering covering the front of it and a pale pastel-coloured front door. The housed my mother had lived in had a frontage of dark grey bricks and a chocolate-brown front door. The car drove on and my parents made no more reference to those houses.

I was fascinated by it though. I might not have been a perceptive teenager, but my imagination had matured early and was very alive. Falling in love with the next-door neighbour was a cliché of much fiction, and even songs, and here were my parents who had done that. But it also gave me another insight into my parents’ lives, especially before I was born. My father loved to tell me stories about being a boy during the Second World War and my mother would talk about growing up and living with my grandmother, but neither of them talked at all about their adolescence and courtship. Their lack of information intrigued me; my imagination began to fill in the details.

But how did they meet? Did their mothers become friends, chatting over the garden fence, and so they got to know each other? Did my father see the new girl next door and decide that he wanted to court her? Did my parents become friends first and then from friendship did romance bloom? I don’t know, they never told me, but my imagination has filled in that blank space over and over again. I am not a fan of romantic fiction, but I am fascinated by people’s stories. How someone met their partner can tell me so much about them, about their relationship, and it fascinates me because we are all different and we all have our stories. As a writer, how couples met can be the catalyst for so many stories and can help me shape characters.

But I just don’t know how my parents met.

How did my father feel when his brother was dating the woman he wanted to? Or did he first notice my mother when she was his brother’s girlfriend? Did my father dating his ex-girlfriend affect Arthur’s relationship with his brother? As for my mother, why did she stop dating Arthur and start dating my father? What did my father have that Arthur didn’t?

I don’t know the answers to any of those questions and I won’t now, both my parents died nearly twenty years ago. I wish I had asked them those questions, asked them how they met, asked them about their courtship, about their life together before they married. They were middle-aged when I was born and they always seemed so old to me as a child, too old to have once had a romantic life or even a life before they became parents. Back then, I had such a narrow view of life. I have learnt differently since then.

After my parents died, I inherited so many of my mother’s photographs. One of my favourite ones is of my parents before they married. It was taken on a summer’s day and my parents are standing in front of a farm gate. My mother is wearing a white 1940s dress with a wide belt around her waist and the skirt flowing out under it. My father is in shirt sleeves with his left hand down by his side, carefully holding a cigarette. They both are wearing photograph expressions, their best smiles directed into the camera’s lens. They look so happy.

There is a postscript to this story. The last time I saw my Uncle Arthur was at my father’s funeral. It was during that awkward limbo time when we were waiting for his funeral to begin, waiting for the right time to leave the house for the church, waiting for all the other mourners to arrive. I was standing outside my parents’ house with my brother, just waiting.

My cousin’s car pulled into the street and he got out of it. Out of the passenger side of the car slowly stepped my Uncle Arthur. But he was the double of my father. The same build, the same profile, the same head full of hair. He was my father’s doppelganger. The shock caught in my throat.

“Yes,” my brother agreed with me.