Company, at the Southwark Playhouse.

It’s not so hard being married, it’s much the cleanest of crimes,


It’s not so hard being married, I’ve done it two or three times.
Lyric from The Little Things We Do Together, Company. 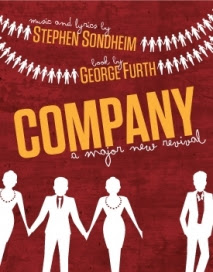 Company is musical that takes a sideways look at marriage. Most musicals follow the plot of boy meets girl, there is an obstacle in their path, they overcome that obstacle, boy and girl lives happily-ever-after. Not so with Company, it takes a look at marriage and relationships and finds them wanting.
The plot here isn’t a simple journey from A to B, the plot or lack of it revolves around one man and his friends and relationships. Bobby, the central character, is a man living in New Year and on the eve of his thirty-fifth birthday. He’s single and has a reluctance, even fear, about being in a relationship; he can’t commit to a relationship and is running three girlfriends at once. The musical takes the form of different scenes of Bobby with his friends or girlfriends, with the songs acting as commentary on the action or forming part of scene.
The different married couples all have different problems in their relationships. There’s the overly competitive couple, who even complete when they give things up. There’s the couple with the repressed and mousy wife and dominating husband, but theirs makes for a sort of wedded bless, not wife abuse. There’s the couple who are happier together once they are divorced, though they don’t separate. There’s a woman marrying the man she’s lived with for years, on the morning of her wedding day decides she doesn’t want to get married (this scene was both painfully funny and very touching). Then there’s Joanna (the character who gets two of the best songs in the show), a very bitter and angry woman whose has driven away two husbands but her third husband is deeply in love with her and won’t leave her. Threaded all of this is Bobby and the mess he’s making of his life.
Bobby is a character not often seen today, an adult male, who doesn’t act like an overgrown teenager, afraid of marriage and commitment. We’ve see many female characters like this and male characters who are no more than overgrown teenage boys, but rarely are they adult men like Bobby. The musical never examines why he’s like this (there’s no song about his awful childhood, etc...) but it looks at the effect it has on his life. He doesn’t want to be alone but he doesn’t know what or who he does want. 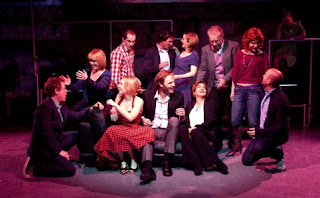 Also, for a musical, there is a large number of female characters here, the wives being more interesting than their husbands, but this is more about its characters than it is about the musical’s plot. Each character having their moment of revelation in their scene with Bobby – Joanne’s bitterness falls into place with her scene with Bobby, late in the second act.
The Southwark Playhouse’s production certainly puts the spotlight on the character’s. The bare stage, with its three level platform upstage, doesn’t just give the characters space to breathe but to shine. It is very much about the people on stage and not the scenery around them.
For a musical, especially one on at a fringe theatre, there wasn’t a bum note sang here. All the cast had fine and on key singing voices. Their acting too hit all the right notes, though some of husbands certainly having the weaker roles. Rupert Young, as Bobby, was both handsome and charming, he brought a sort-of boyish charm to his role, giving his female friends mothering of him a sexual edge. Of the supporting actors, Siobhan McCarthy (as Joanne) and Michelle Bishop (as Bobby’s very New York girlfriend Marta) stood out. It was a surprise and pleasure to see Mark Curry (The one time Blue Peter presenter) here in the role of Larry, Joanne’s long suffering husband.
I first saw this musical over fifteen years ago, when I was single and not being successful at relationships, and found it very disturbing. In Bobby I saw a character that I didn’t want to turn into and feared that I might. Now, I’m older and have been with my partner over ten years, I didn’t find Company that uncomfortable. Now, I was able to sit back and enjoy the portrayal of the characters here, the crazy and unhappy people, I was also able to watch Bobby twist himself into knots over relationships. 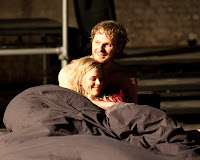 Company was first performed in 1970, it’s over forty years ago and yet it hasn’t aged a day. This production is set in the present day and feels completely appropriate. It certainly doesn’t feel like a period piece or a story very much of its time. How many other musicals from the early 70s are still relevant today?
Drew
Posted by Drew Payne at 15:15