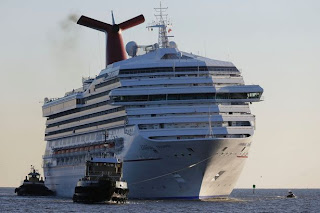 On 10th February the cruise ship, Carnival Triumph (owned by the same company who owned the Costa Concordia that capsized off the coast of Italy last year) had a free in its engineer room. No one was hurt but the ship lost power. One of the things affected were the ship’s toilets. Passengers described it as “Third World” conditions. Here’s a BBC report on it.

Here I imagined the holiday diary of one of those passengers. In sketch form, I submitted it to the Newsjack Radio program, I think “toilet humour” was a bit too much for them, but I like this sort of humour.

This is the holiday diary of me, Mrs. Madison Boulevard. Myself, my husband of nineteen years, Brick Boulevard, and our two wonderful teenage children, Cameron-James III and Shannon-Krystal are holidaying on the Cruise Liner, The Carnival Triumph. It was recommended to us by our neighbor and fellow church goer, Mary-Belle Newton. She has such immaculate taste so I am sure we well have a simply fabulous holiday.

Cameron-James III has just informed me that our Cruise Liner is owned by the same company that owned the Costa Concordia, the ship that sank off the coast of Europe, last year. I told him, Europe is a far more unsafe and dangerous place then here in American. They have socialism. Nothing bad can happen to us, we’re Americans.

Daman that internet, he’s learning too much from it.

I am so bored. There is no decent malls on this ship and I can’t get any of my favorite TV shows here. The crew all say there is no reception out at sea, but I know they’re not trying. This won’t happen at home.

There has been a fire in the engine room and now we have no power. I blame all those Mexicans in the crew, they all have moustaches and way too much aftershave. This means we have no television, and I was just getting into re-runs of The Love Boat. Brick cannot use the gym, like he ever does at home, and the children cannot partake of the unlimited ice-cream in the dining hall. That is a good thing, if you ask me, Shannon-Krystal is getting far too tubby. She’ll never get a husband looking like the side of a barn.

No electricity means no toilets, and the toilet in our middle-range, semi-deluxe suite has already backed up. I knew having the Full Mexican Four Course Banquet last night was not a good choice.

The smell of our toilet can clean knock you off your feet. We are having to relieve yourselves in the shower, Shannon-Krystal broke our sink when she squatted over it, and Brick has taken to doing his dirty-business into a plastic bag. I wish he would open the bag first. My own mother taught me to hold my own bowel movements in, a lady only uses a toilet bowl.

Praise the Lord for Tupperware! I thought my insides were going to explode.

The ship is rolling from side-to-side alarmingly! This is something to do with having no power and therefore no stabilizers. All I know is that our overfull toilet bowl is sloshing its contents all around our bathroom floor. Dear Lord, the place looks like a South American pig farm, and smells worse. And to add insult on top of that, I’ve run out of Tupperware boxes.

Because there’s no power, they can’t cook any food. The crew is now rationing the food. As I said, we are Americans, we don’t do rationing, most of us can’t spell it. We demand triple serving of everything... Well, not the Full Mexican Four Course Banquet.

The children are crying with hunger. Well, that’s what I tell myself, but Brick keeps forgetting and opening the bathroom door.

We are now running out of drinking water, because we have no power. Brick says he’s not too concerned because he can drink beer, which he is doing in large volumes. This will only make him want to relieve himself and I have now locked and barred the bathroom door. The sight in there is truly unholy.

Some toilets in first class are still working. We all rushed up there but there was a huge queue for them. We’re Americans, we didn’t wait at the end of queues, we should be at the front of them. I blame and Obama and his damned socialism!

Now these toilets are blocked! This is where liberal bowel movements gets you. At least Cameron-James III found some clear plastic bags.

Last night we slept up on deck. It was cold, uncomfortable and were we jammed in tighter then illegal immigrants in the back of a Wal-Mart truck, but at least you could only just smell the toilets out there.

All the food that is left is dry crackers. Why did I start my Jenny Craig diet at New Year, with the misery that entailed, when I could have just waited for this holiday and watched the pounds drop off me?

Cameron-James III has got us food! He had to sell his body to a Mexican crew member for it. I was about to chastise him for selling his virtue and kneeing in front of the Devil’s Toolbox, but he’d got us toasted sandwiches!

A helicopter has delivered emergency food to the liner. I overheard Shannon-Krystal tell Cameron-James III that he sold himself for nothing. He told her he didn’t care, the sailor was hot. I hope this doesn’t mean what I think this means. Cameron-James III wants to go to sea!

People, obviously not Americans, have been stealing food off their fellow passengers. How unchristian. One of them burglized our cabin and stole all my full Tupperware boxes. They’ll get a surprise when they try to eat those chocolate brownies.

Brick has just informed me that today is Valentine’s Day. He suggested we lock the kids out of our cabin and have a night of romantic, married relations. I told him that he could have that if he would shower, and not in urine, empty our toilet bowl so I can have a satisfying movement, and clear our cabin of that smell!

We slept up on the deck again tonight.

Praise the Lord, we are on dry land, with working toilets! This floating septic tank has finally made land, and not a today too soon!

We docked in Mobile, Alabama. Alabama? I would complain that this is a terrible common place to be in, but they have working toilets so I can’t.

The pencil-necks from the cruise company have offered us a free cruise as compensation for our nightmare. I was going to tell him to shove it were the sun-don’t-shine, but Brink only went and signed us up for it. But as he said, a free cruise is a free cruise, and what could go wrong it?