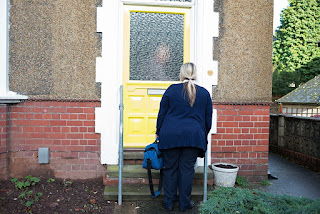 A half of those community nurses surveyed had been the victim of abuse at work, and one in nine had been physically and verbally attacked. Yet only 13% of them have personal alarms (even though they were widely available in 2009 for lone workers and originally government funded).

Cost-cutting measures are putting community nurses’ safety at risk but it goes further than the lack of personal alarms, it is the increased pressures being put on community services without extra resources.

Hospitals have to treat more patients for less money (The yearly increase to NHS funding being only 0.9% [2], well below even inflation), so they are discharging patients earlier and earlier, and more and more ill patients are being treated in the community, but there hasn’t been the extra resources put into the community to meet this increasing demand.

Community health services have around 100 million patient contacts each year, and account for about £10 billion of the NHS budget (or 8.3% of all NHS spending) (3). There has been a 15% increase in District Nursing workload between 2011 and 2015 (4) yet the NHS only plans to increase spending on Primary Care as a whole between 4% and 5.5% year-on-year for the next five years (5). There has already been a 15% increase in the workload and it shows no sign of decreasing, this planned increase in spending will be far outstripped by demand. This does not take into account the £2.5 billion cut in Social Care funding, 20% of their funding (6); which also has a severe knock-on effect on District Nurse caseloads.

Patients’ expectations of what can be provided in the community are often unrealistic, measuring it against the very public targets of A&E Departments, and expecting instant access to services. More people want medical input for things that they can manage themselves (“It’s a nurses’ job to give my granny her tablets. The nurses did it in hospital”). The community isn’t an acute service and many patients are reacting with anger and frustration when they are faced with its limitations.

Also, patients in the community are often not aware of shortages of Community Nurses. Sometimes the only time they are aware of it is when they have a visit cancelled. Patients on hospital wards can see how many or how few nurses are on duty and how busy they are. Patients in the community only see a Community Nurse when they visit that patient’s home, they cannot easily see how few nurses are available and how busy they are. Patients are isolated away from the stresses that many Community Nurses are under.

The NHS has always been poor with dealing with abusive patients, but worst so in the community because the argument always comes back, “They’re housebound, who else will see them if community nurses won’t.” A friend of mine, another community nurse, was punched by a patient at work. The same patient had slapped another nurse and been racially abusive to other nurses. Senior management wouldn’t remove treatment from this patient, still requiring nurses to see her. They were only spared further abuse when the patient went into hospital. 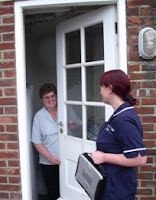 NHS Improvement has produced “Safe, sustainable and productive staffing in district nursing services” (7). These draft guidelines are designed to identify “the organisational, managerial and contextual factors that support safe staffing” in the community. But these guidelines do not make any recommendations as to what are safe staffing levels or safe caseloads numbers, instead recommending that that these numbers be agreed “locally”. This fudge could easily lead to poor staffing levels being accepted as the norm, and asks the question what is the point of these guidelines?

Cuts have put community nurses safety at risk but it goes deeper than just lack of personal alarms. We know of the problems caused by under staffing on hospitals wards, no one in the NHS can forget the Mid Staffs scandal (8), why aren’t we more concerned about the same problems in the community?

I left my role as a community nurse last year, due to unrelated health reasons.
However, I loved my job and community nursing was all I had ever wanted to do. I gave 200% each shift, for the whole of that shift and so did my colleagues.
Shifts were scheduled as 8-4pm or 1-9pm.
In reality those shifts usually started around 7.30 and, if you were lucky, finished around 6pm, or started around 10.30 and finished anywhere between 9.30 and 10pm.
All shifts had absolutely no room for a comfort or even a lunch break and if you happened to attend a visit that required emergency support you were guaranteed to be working way, way past the end of your expected shift, because you still had to finish that day's allocation. There was never room to visit the next day as that would be just as packed as every other day!
Add to this a lack of medical supplies because you had no time before the start of your day to call in to the office and collect possible necessities. Then add time to collect and deliver any samples that needed to be taken to the gp surgery for collection before THEY break for lunch!
Incidentally, consider how long it takes for a lady of 80+ years to get from her chair, to the bathroom, negotiate a tiny sample pot to pee into and return to you before settling back into her chair so that you can attend to her needs as required on the actual visit.
So this would be an average shift for just one community nurse in a team of approximately 5-6 (if you're lucky and no one is off sick that day!).
Then add into this lovely mix Emergency Calls...blocked catheters, trips and falls that need to be seen, leaking dressings that need re-doing, etc., etc. Who takes those extras?? Someone has to - they're emergencies!!!
This is the reality of a community nurse's working day. Isn't it a picture? You're probably reading this thinking it's totally exaggerated?? I can tell you from first hand experience that this is the reality of what we do out there.
With the "progress" of electronic mobile devices, community nurses have lost the support of their "team" information exchange and knowledge is no longer freely available, because honestly, who has time to answer their phone within their working day!?
And then there's the relatives...there's ALWAYS a relative somewhere along the way who wants to "understand" why you can't stay and give mum her pills or make her a cup of tea "while you're there anyway". Or my favourite one "the nurse is usually here before 11. What took you so long? We thought you weren't coming!" Believe me, I know I speak for every community nurse I have had the privilege to work with, if I honestly had the time to make your mum that cup of tea, or to arrive at a specific time, I would do it in a heartbeat.
Sadly, as you so rightfully state in your post, there is no funding being filtered into the community to care for these patients that they send home because they need that hospital bed for someone else.
The people who suffer are the patients. They are given the best care we can give in an unrealistically timed visit and the only thing in the news is the lack of hospital beds.
Perhaps if they allowed patients to be well enough to be at home, and provided adequate funding for more community care, the patients wouldn't be needing another hospital bed so frequently??