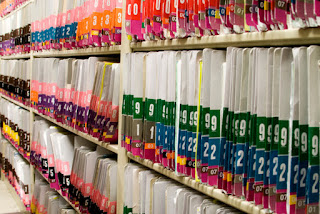 "Completely unacceptable", Jeremy Hunt described the data leek (1). He said patients needed to feel confident the NHS would look after their personal data. "If we are going to win that trust we need to strengthen the independent oversight of data security within the NHS to a level that we don't have at the moment." (1)

Hunt wasn’t speaking about the patient data leak that came to light this week (2), he was talking about a patient data leak that happened in 2015 (1). 56 Dean Street, a sexual health clinic in Central London, ran a regular email newsletter sent out to its patients, many of whom are HIV positive. At the beginning September 2015 they sent out an email to 780 patients but the person sending out the email newsletter forgot to hide the recipients email addresses. Everyone who received the email could see all the email addresses of everyone else it was sent to (3). Jeremy Hunt was very quick to condemn it and in very harsh language.

Having your health status outed to 779 other people is certainly traumatic and I won’t want it to happen to anyone, but ultimately no one’s health was damaged by it. I cannot say the same for data leak that was revealed on Tuesday.

On 27th June the National Audit Office published a damming report into the NHS Shared Business Services (SBS) disgustingly poor handling of confidential patient documents (4). Jeremy Hunt was forced to answer questions in parliament about this sorry affair (5). It has all made a mockery of his claims, back in 2015 (1), for patients to be able to trust data protection in the NHS.

In 2008 NHS Shared Business Services (SBS), a private company, was created as a joint venture between the Department of Health and Sopra Steria (4). Though a private company NHS SBS is 49.99% owned by the NHS and the Department of Health had three places on the company’s board, though them only took up one of them, Jeremy Hunt himself took that place (5). NHS SBS’s website boasts that the company will save the NHS £1 billion by 2020 (6).

NHS SBS was contracted to deliver medical paperwork from hospitals to patients’ GPs in many areas across the country. First they had contracts with PCTs and then, after PCTs were abolished in 2010, with NHS England (4).

In 2011 NHS SBS’s own internal audit found that they had 8,146 items of undelivered correspondence (4), yet they seemed to do little or nothing about it. In June and July 2015 an NHS SBS administer raised concerns internally about a large back log in undelivered correspondence (4). They raised concerns, in August 2015, that the backlog was now being destroyed (4). As far back as January 2014 Senior Managers at NHS SBS knew about the clinical risk this backlog of correspondence posed but they didn’t have any plans to deal with it (4). In November 2015 the backlog of correspondence was escalated to NHS SBS’s Chief Executive (4).

NHS SBS told NHS England, their employer, about the backlog on 16 March 2016 and the Department of Health (49.99% owner of the company) the next day (4). NHS SBS’s
Chief Executive told the company’s board about the problem on 24 March 2016 (4), a board Jeremy Hunt himself sits on. In April 2016 the Department of Health decided not to tell Parliament or the public about NHS SBS’s failure to deliver patient correspondence (4). They argued that they didn’t want to “worry” patients and the public, and publicising this would have lead to questions they could not answer (4). The subtext being that the Department of Health didn’t want to be embarrassed by this, they were one of the majority owners of NHS SBS.

The DoH did inform parliament on 21 July 2016 about NHS SBS’s failure but only as a written statement (4), if Hunt had done so in person it would surely have generated a lot more publicity. In the written statement Hunt called it “an issue with a mail redirection service” (4). It not mention the potential harm to patients, which NHS England was concerned about, that this backlog of correspondence could cause.

As of 31 May 2017, NHS England has found 709,000 items of unprocessed correspondence and 1,788 cases of potential harm to patients have been identified, so far (4). They have still not finished checking all the undelivered patient correspondence, and do not expect to do so until December 2017, so far they have only checked a third of the documents (7). The undelivered correspondence included cancer test results, child protection details, patients’ medical records, treatment plans which included changes to patients’ medication and forms registering patients with GP practices (4). NHS England estimates that it will all cost at least £6.6 million in administration alone to resolve (4), they haven’t said how much the clinical follow up of the patients involved will cost, and so NHS SBS has borne £2.26 million of these costs (4). Will this be counted against the £1 billion NHS SBS claims to be able to “save” the NHS? (6)

The National Audit Office’s report into all this was very scathing (4). They criticised NHS SBS for its poor response to the backlog, poor management and low prioritising of the backlog and for being “obstructive and unhelpful” to the NHS England investigation (4). They also criticised Jeremy Hunt for a conflict of interest, he was both Secretary of State for Health and had a seat on NHS SBS’s board, he was in charge of the Department of Health who are responsible for NHS England who were the organisation who employed NHS SBS and he was on the board of NHS SBS.

Answering questions Hunt justified not originally telling parliament and the public about this scandal because he said if he did GP practices would have been “overwhelmed” by calls from worried patients (5). This is the opposite of what he called for after the 56 Dean Street email breech (1). Hunt did admit that the Department of Health’s oversight of NHS SBS was not good enough (5), but this should fall directly on his shoulders because he was the only Department of Health person sitting on NHS SBS’s board. Will he be held directly responsible for this complete failure? Who will he answer to for this?

Hunt also told MPs the investigation had not found any patient harmed by this paperwork backlog (5), but how could he claim this? NHS England’s investigation into this disgusting scandal will not be completed until the end of the end, and correspondence not sent to GPs included cancer test results and treatment plans that included changes to patients’ medication. Again Hunt has made claims that the evidence does not support.

When I first heard about this scandal I can’t say I was surprised, but I was deeply sickened. Again this was a scandal were a private company, contracted to work for the NHS, was putting profit before patient care, and exercising the most disgustingly low clinical governance. What sickened me most was how deeply Jeremy Hunt was involved in this and how he tried to cover it up. Yet again Hunt has shown poor judgement and even poorer leadership. 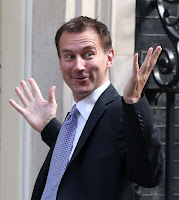 This isn’t the first time Hunt has failed and failed to such a high degree. I have worked for the NHS for nearly 30 years (I worked in the NHS several years before I started my nurse training) and I have watched a large number of extremely poor Secretaries of State for Health bungle their way through the NHS but Hunt seems to be the worst in my living memory. Whenever there’s a problem or scandal in the NHS Hunt’s leadership repeatedly fails whatever is needed. His reactions show that he just doesn’t understand the problem (8), or he ignores the problem (9), or his actions make the situation worse (10), or he is very quick to pass the blame (11), or worst of all he spills forth untruths (12).

Why is this completely incompetent man still in such an important job?

The answer is simple, the NHS is such a low priority to Theresa May. Her actions since becoming Prime Minister attest to this, starting by not sacking Hunt from his post.

Our Secretary of State for Health is incompetent and one of the worst in living memory, but his repeated failure in the role only bares testament to the poor quality of the leadership of the Prime Minister who keeps him in this post.

P.S. NHS SBS’s twitter address is @NHS_SBS, why not tweet them with your feelings on how they managed this scandal? I did.
Posted by Drew Payne at 21:46