Do Unhealthy Attitudes Ever Change? 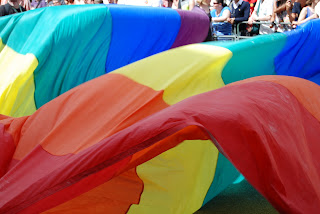 During my first year of nurse training (twenty-five years ago) I ran into a wall of homophobia. I was told by some of my vocal colleagues that I only wanted to be a nurse to see naked men, that all gay men deserved AIDS, that I was a danger to children, and that God could heal me and make me “normal”.  I endured it because it was 1990 and homophobia was what I expected as a gay man.

It's now 2015 and our society has changed so much since my student nurse days. We are so much more open, we have so many legal protections now against homophobia; last year my partner and I got married. I thought we had come so far and then I was brought down to earth with a crash.

This month, Stonewall (the LGTB campaigning organisation) published Unhealthy Attitudes (1), their report on the treatment of LGBT health and social care staff, and it was a shocking read. It felt as if I was right back there twenty-five years ago, like nothing had changed.

The report, written following a YouGov survey of health and social care staff, found that one in four people had heard a colleague make negative or homophobic statements about LGBT people and one in five had heard negative statements about trans people. A quarter of them had been the victims of homophobic bullying from patients and service users. 10% had heard colleagues make claims that LGBT people can be “cured”.

These statistics may sound cold and not greatly impressive but the report also carries the realities behind them, it is full of personal quotes. The nurse who was told by another nurse that he should be hung for being gay. The nurse whose manager told her that homophobic comments were “only banter”. The nurse who was ostracised by his whole staff team, at work and socially, when it came out he's gay. And many comments where trans people were called “it” or “she-male”.  Then there were the comments that were themselves homophobic. A healthcare assistant (HCA) who said people are not born LGBT but “choose” this “lifestyle”. A doctor referring to anyone he doesn't consider “normal” as “deviants” whose needs shouldn't be “forced” on the majority.

Yet this report has created little outrage or even comment from our nursing leaders or the wider community. If this report was highlighting racism or sexism surely there would have been an outcry about it, articles in our newspapers or items on the television news. Yet this report barely caused a ripple.

Homophobia still seems to be the prejudice that we most easily accept, it's just “banter”, it's just someone's personal belief or personal views, and any challenge to it is seen as “political correctness gone too far”. But it's none of these; it’s prejudice and it can damage or even destroy people's lives. Why, as nurses, are we tolerating this?

There have been several reports previously from Stonewall highlighting the poor treatment experienced by LGBT people from the NHS and how reluctant they are to be out to healthcare workers. The results of Unhealthy Attitudes only reinforce these earlier findings. How can we offer patients open and non-judgmental care when we can't offer non-judgmental support to our own colleagues?

We have spoken a lot about “person-centred care”, but it seems that if the person is LBGT then a large part of their personality and needs are ignored, at best. LGBT people have their own healthcare needs, more than just using the gender-natural term “partner”, but the evidence is that they are still being ignored.

How have we got to this point? Unhealthy Attitudes has a clear recommendation, staff training in LGBT issues. It found that three in four people haven’t received any training in the needs of LGBT people and only one in four have been provided with any equality and diversity training. Yet the NHS has a legal responsibility to eliminate discrimination.

In the last three years my own equality and diversity training has consisted of one fifteen-minute, online presentation that covered the needs of disabled people, black and ethnic minorities people and LGBT people, but in no depth at all for any of them.

How can we say we focus on person-centred care when LGBT staff’s safety is so bluntly ignored by the NHS?