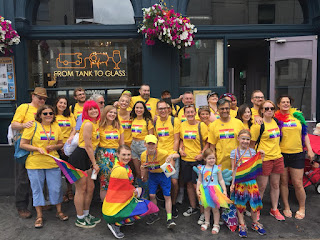 Something New Every Year

I’ve marched in the Pride March many times before, with friends, with LGBT organisations, but never before openly as a nurse. This year, a group of staff in my Trust’s LGBT Network organised to take part in the London Pride March and we had the blessing of our Trust.

On Pride Saturday, all of us in bright yellow tee-shirts (with our Trust’s name and logo emblazoned across them) and all wearing our security bracelets, we took our place in the march. We were LGBT staff and our straight allies gathered around our placard that announced who we were, Whittington Health Staff Inclusion Network.

Marching in Pride openly as NHS staff was one thing, but the reaction we received from the crowds along the route was amazing. People smiled and waved at us, they clapped and cheered us, people were so happy to see us. All we were doing was marching.

The NHS is still not an inclusion or safe place for many LGBT patients. A recent Stonewall report found one in four LGBT people have witnessed homophobia from NHS staff and one in seven of them have avoided treatment because of fear of discrimination from NHS staff (1). Yet how much has the NHS done to reverse this situation? Very little. This isn’t the first report by Stonewall, there have been many over the years, all reading the same, and yet the NHS does so little to change this.

What my colleagues and I did at Pride was not a great step forward and for most of us did not require a large amount of effort, yet the reaction of the crowd was almost breath-taking. Those people cheered us on because they were happy and grateful for us being there, and our presence told them that our Trust was working towards providing care in a safe place. 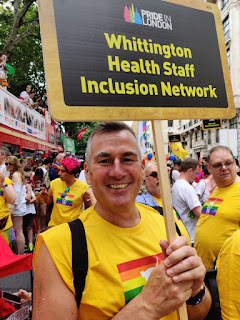 Taking part in London Pride fired all of us up, our WhatsApp group has gone crazy, and we are already making plans for next year’s Pride and getting off the ground an LGBT Staff Network. We need to work hard at making our Trust an inclusive organisation, a safe place for all, but we are starting.

We talk a lot about person-centred care but are we just paying lip service to it when so many LGBT people do not feel able to be open with us about themselves for fear of discrimination?

Every long journey starts with a single step, but who would have thought that step would be marching at Pride? So why aren’t more NHS Trusts taking part in the different Pride celebrations around the country? Our presence would say so much to the LGBT people there.