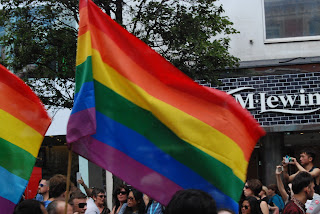 On Saturday (5th July 2008) it was London LGBT Pride and, with bright sunny weather, my partner and I had a wonderful day there. The highlight, as always, was the Pride March. People were laughing and smiling, enjoying walking through central London together and openly.

The march was headed by groups representing many of our uniformed and emergency services. First came lesbian, gay and bisexual members of the navy, army and RAF, all in their uniforms. Next followed the police and British transport police, again in uniform. Members of the fire service, complete with a bright red fire engine, followed them. Finally came members of the ambulance service and St John’s Ambulance service. It was a very impressive sight and the crowds cheered and clapped as they passed. But I was left with one thought, where are the nurses?

True, there was an NHS float, much later in the march, but it was a general float. It didn’t have the impact of a group of nurses or healthcare professionals marching with the others at the head of the march.

But why do nurses need to march at Pride?

We have a long way to go, but nurses marching at Pride will help along that path. Previously the police had a very poor relationship with the lesbian and gay community, there was no love lost on either side. Now, while still far from perfect, there has been a great improvement in police attitudes and an increased trust in the police in recent years. This has been achieved through a lot of different activities but not least of these has been the presence of police officers marching at Pride (not just “policing” it). The presence of those police officers has given confidence in the police. Nurses marching at pride could give so many lesbians and gay men far more confidence in healthcare and nursing as a profession.

Nurses may not be able to march in uniform, with the duty of care that a nurse’s uniform carries, but the presence of nurses marching at Pride, even not in uniform, will go towards building up lesbians’ and gay men’s confidence in healthcare. Who will march though? Well, people like me.

Find out more about this short blog series  here