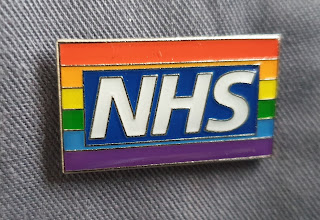 A Safe Place for All?

Freddie Mercury died from AIDS in November 1991. I was a student nurse at the time. One of my colleagues told me that he “deserved it” because of his “lifestyle”. I exploded faced with her homophobia, but I was turned on by others who supported her, saying their views were right because they wanted to be parents and any parent would want to protect their sons from the likes of Freddie Mercury. And I was wrong, they said, because I was defending someone like Freddie Mercury. Their homophobia cut me deeply that day.

Last year, my partner Martin and I got married. When I returned to work, my colleague Wendy wanted to see our wedding pictures. When I got them up online, the whole office gathered around to look at them. Nobody made any homophobic or prejudiced remarks; nobody said they didn't “agree” with same sex marriage, though I was asked a lot of questions about our guests.

I have been out as a gay man throughout my entire career, at first I regularly came up against blunt homophobia from many colleagues, but as the years passed society has changed, homophobia is declining (I do work in London, one of the most metropolitan of all our cities). We now have openly gay MPs, police officers, soldiers and military personnel, and no longer is it “career suicide” when an actor comes out.

This year, Nottinghamshire Healthcare NHS Trust was named to be the most lesbian and gay-friendly employer in Britain (1). Every year Stonewall, the LGBT campaigning organisation, name their Top 100 Employers and this year the top one was an NHS trust, the first time an NHS trust has achieved this.

So life is rosy and we have achieved all we need to? No, far from it.

I have also experienced the NHS from the other side of the nurses’ station. I have asthma and have been an NHS patient for years as an in-patient, out-patient and GP patient. I am an out gay man, but when I'm a patient I suddenly rush back into the closet, it's the only time I do, but I have good reason to. I always fear that if a clinician finds out I'm gay they will give me prejudiced treatment because it has happened in the past. I have had clinicians try to force me to have a HIV test, wear two pairs of gloves when treating me, and make comments suggesting that it is my fault I am ill because I’m gay.

As a patient I am so vulnerable, I rely on good relationships with the people treating me. The fear of homophobia hangs over this, if they know I'm gay will their homophobia come out and suddenly the quality of care I receive fall? I can't take that risk.

The picture for lesbian and gay staff is equally as patchy. Nottinghamshire Healthcare NHS Trust might be the most lesbian and gay-friendly employer in Britain but there were only eight other NHS organisations in the Stonewall Top 100 Employers.

We have come a long way, but we still have a long way to go. We can’t sit back and say the job is done. Yes, we have marriage equality and gay characters on our soap operas, but the NHS still isn’t a safe place for all people, and how can we rest until it is?