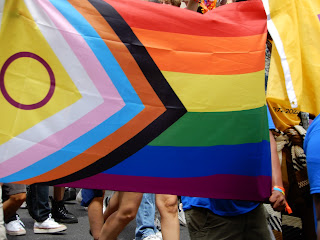 The next five blogs form a short series, which I have called “With Pride” because they were all originally comments pieces, on LGBT rights and healthcare, published in the Nursing Standard magazine, and I am proud of having written them.

For nearly fifteen years, on and off, I have written comment pieces for Nursing Standard and a lot of them were on LGBT healthcare. These pieces chart changes in attitudes, but they also had recurring themes and one was responding to a very disturbing piece of research, reading which just left me frustrated and angry, I felt nothing had changed.

The first and last pieces here almost become companion pieces though they were written eleven years apart. The first one asks a question and the last answers it.

I am posting here the original versions, with their original titles and all the links to their source material; they were edited for publication but mostly this involved reducing their word count.

The last one was written in 2019, we had every intension of following that one up the next year, but history had other ideas. There were no London Pride marches in 2020 and 2021 due to the COVID pandemic. This year was the first one since then and fate has intervened again for me.

I want to say “happy reading”, but some of these pieces are on uncomfortable subjects. I am very grateful to the Nursing Standard for giving me the opportunity to write these pieces and to be able to shout above the crowd.

Links to the other With Pride blogs: